Why is the Nazi holocaust more important than the Slave Trade and the Death of 10 million Africans in the Belgian Congo?

If you Google ‘books on genocide in Belgian Congo’ you come up with just one book. Adam Hochschild’s King Leopold’s Ghost: A Story of Greed, Terror and Heroism in Colonial Africa. If you type in ‘Nazi holocaust’ then you have an endless selection.

There are literally thousands of books, from every conceivable angle, on aspects of the Holocaust. Most are worthless but nonetheless no respectable library is without a shelf (at least).

How is it that the Jewish Holocaust (because there are few books on the other victims – the Disabled, Gypsies, Russian POWs, Political Prisoners, Jehova Witnesses) has received such attention yet the genocide of Black Africans has not?

In these days of Black Lives Matter there is one, obvious, answer. White lives matter more. Yet this is not the whole answer, indeed it is not even half an answer. The Irish Famine is also not top of the book lists. Admittedly the British killed ‘only’ one million but the accepted figure of Jewish dead in the Holocaust is 6 million. The estimated number of dead in the Belgian Congo is 10 million. The estimated death from the Slave Trade is about 14 million.

Of course the industrial extermination of the Jews of Europe was, by any stretch of the imagination, horrific. But was death by gas or shooting worse than castration, chopping off of limbs, burning and skinning alive. It took minutes to expire from bullets or cyanide gas, whereas the tortures of the Belgian colonial sadists are unimaginable.

One thing is for certain. It isn’t about the special place of Jews before the anti-Semites get their heartbeats racing. Indeed for a long time after the Holocaust there were very few books about the Holocaust written, albeit they were the best. Raul Hilberg’s The Destruction of European Jewry, Gerald Reitlinger’s The Final Solution and Gerald Fleming’s Hitler and the Final Solution. Today there are more good histories such as Richard Evan’s trilogy on the Third Reich and Christopher Browning’s The Origins of the Final Solution.

In post-war America the Holocaust was played down to the point of non-existence. During the McCarthy era emphasising the Holocaust was likely to incur accusations of being a Communist. At the funeral for the executed Rosenbergs the Song of the Warsaw Ghetto was sung.

Nor was the Israeli state any different. In the late 1940s and early 1950s the Holocaust was barely mentioned in Israel. In a 220 page Israeli history textbook published in 1948, just one page was devoted to the Holocaust compared to 10 pages on the Napoleonic wars. [Idith Zertal, Israel’s Holocaust and the Politics of Nationhood, p. 94] 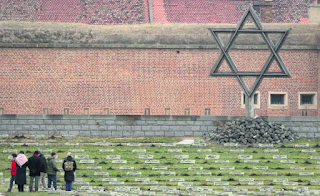 Why the change and when did it start to come about? Both Peter Novick [the Holocaust in American Life] and Norman Finkelstein [the Holocaust Industry] agree that the change began after Israel’s victory in the 6 Day War in 1967. By defeating Egypt’s President Nasser and slaying the dragon of Arab nationalism, Israel had proved its utility to US imperialism. It represented a dagger at the heart of the Arab East.

In Israel itself attitudes began to change with the show trial of Adolf Eichmann in 1961. Eichmann was, of course, guilty of all that he was accused of and deserved to hang but that wasn’t the point of the trial. It wasn’t to reveal information so much as to begin the process of using the Holocaust as a source of Israel’s legitimation. Israel claimed the Holocaust as its inheritance, as well as a source of financial reparations.

Previously Holocaust victims had been seen as a source of shame in Israel. Unlike the brave Israelis, who slaughtered Arabs without mercy, yea even the suckling on a mother’s breast, the Jews who went to the gas chambers were seen as cowards.

Hayyim Nahman Bialik, the national Zionist poet, spoke of the ‘disgraceful shame and cowardice’ of the Jewish victims of the 1903 Kishinev pogrom. Yitzhak Greenbaum, of the Jewish Agency Executive Committee, spoke of ‘unparalleled feelings of burning shame.’ ‘Sheep to the slaughter’ in the words of Eichmann’s prosecutor Gideon Hausner.

The first Holocaust survivors to arrive in Palestine were called sapon (soap) after the myth that the bodies of victims were made into soap.

Hanzi Brand wrote of how, when she settled on Kibbutz Gvata Haim, the other members ‘talked about their war to avoid hearing about hers. They were ashamed of the Holocaust.’ [Tom Segev, The 7th Million, p. 471]

Peter Novick spoke of the prevailing view in the Yishuv that holocaust survivors represented the ‘survival of the worst.’ In Ben Gurion’s view they were

‘hard, evil and selfish people and their experiences destroyed what good qualities they had left.’

Ben Gurion went on to add that they were

‘A mob and human dust, without language, without education, without roots and without being absorbed in tradition and the nation’s vision.’

David Ben Gurion, Israel’s first Prime Minister had already demonstrated during the war his indifference to the genocide of Europe’s Jews. His only concern was that the extermination of Europe’s Jews would render the establishment of a Jewish state irrelevant and reduc the number of immigrants to Israel.

‘where there was a conflict of interest between saving individual Jews and the good of the Zionist enterprise, we shall say that the enterprise comes first.’ (The Burning Ground, p. 855)

It is therefore clear that the obsession, because it is an obsession, with the Jewish holocaust and the almost complete ignoring of, for example, the British genocide in Bengal which killed an estimated 32 million people, has nothing to do with genuine horror.

We can see that quite clearly with Holocaust Memorial Day which excludes all genocide before the Nazi Holocaust. So there is no mention of the Armenian Holocaust, the Slave Trade or what happened in the Belgian Congo. Why? What possible logic is there for time limiting which Holocausts are deserving of attention?

The only conclusion is that the Nazi holocaust of the Jews serves a major ideological and propaganda purpose in terms of legitimising western imperialism and capitalism. The Nazi Holocaust makes western capitalism seem anti-racist whereas in fact the way it is used is to reinforce its racism and imperialism. There simply is no other explanation.

If you go to the Holocaust Memorial Day Trust’s web page on the Holocaust it tells you that ‘The Holocaust (The Shoah in Hebrew) was the attempt by the Nazis and their collaborators to murder all the Jews in Europe.’ The page on the Holocaust deals exclusively with the Jews. It says nothing about the Euthenasia campaign between 1939-1941 when about 100,000 mentally and physically handicapped Germans were murdered, mainly by carbon monoxide poisoning.

As Henry Friedlander’s excellent The Origins of Nazi Genocide argues, the Holocaust began in 1939 not 1941/2. The very same gas trucks used to murder the disabled, and German Jewish disabled were singled out in particular, made their way to Chelmno, near Lodz in Poland and there they established the first extermination camp in December 1941.

This prioritisation of the Jewish holocaust is not only racist but it’s also bad history. It treats the Holocaust, in the words of Tom Segev, as a ‘bizarre cult of memory, death and kitsch’ in which false memory is used to bolster the Zionist narrative of eternal anti-Semitism.