The following comment was made by Blogger blogger 'Free Thinke' (the dropping of the 'r' appears deliberate - edgy, no?) aka 'Franco Aragosta, il pescatore saggio' (there's nothing Italian, fisherman or wise about 'Free Thinke', as we shall see) Here it is in full (brace yourselves!):

It was Lincoln's fond hope that the Negroes would all EMIGRATE to the newly founded African nation of LIBERIA, which was prepared to accept the newly freed Negroes, who had an awful time trying to sustain themselves once they were no longer fed, clothed, housed and given useful occupation by the Southen [sic] Planters aristoracy [sic] –– however undesirable those living conditions must have been

I believe we have the hotheaded fool John Wilkes Boothe to thank for our present plight.

I feel deeply sorry for the Negroes. They were sold into slavery –– BY THEIR FLLOW NEGROES –– brought here under duress, and treated more like cattle than human beings. It was a MORTAL SIN to have brought them here to live in bondage from the word "GO!"

The corrosive effects of SIN never die; they only FESTER and COMPOUND with each passing generation, UNLESS we humbly turn our lives over to GOD, which very few have ever seemed able to do.

On his own blog, 'Franco/Free Thinke' shows how deeply he feels for African Americans more graphically: 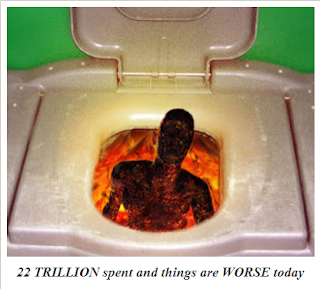 And they say racism is dead in the USA, died when Obama was elected!

Did I mention Free Thinke is a great fan of President Duterte, ooops, I meant Trump?