Israel has not influenced U.S. law enforcement by training it to be more violent, but rather has served as a model in creating the American Security State.

A lot of attention has been directed recently at the “training” American police receive from Israel. It’s extensive and pervasive. The point, however, is not that Israel has made US police more violent. They were violent and repressive a century or more before Israel was even established. It isn’t even that Israel has helped militarize the US police. It has, of course, but in response to fundamental shifts in the American political and economic scene.

The “Israelization” of the American police begins in the wake of 9/11, but three key developments in the US explain why. First, by 9/11 the debilitating effects of neoliberalism, starting in the Reagan Administration but already creating huge social and income disparities in the Bush and Clinton years. They began calling for “law and order,” domestic wars (on drugs, on crime, on “radicals”) and a need to control and pacify an ever-growing precariat, under-employed, under-paid middle-class people, the “working poor, and the largely racialized actually poor. Capitalism’s enforcers are the police.

Second, by 9/11 the US had lost the Soviet Union and communism as an external/internal threat that could be exploited to justify repressive, anti-democratic policies at home. While the threat of “terrorists” had become a minor issue in Clinton’s time, it was not tied strongly to the domestic arena. That tie-in, the third source of police “Israelization,” came with 9/11. The Patriot Act, which until today fundamentally curtails American civil rights and due process, was enacted less than two months later. Clearly it was in the drawer waiting for its opportunity. And again, policing becomes the vehicle for a wholly new para-military task: “homeland security.”

This was the backdrop. It was not an Israeli creation. But Israel been a Security State since its founding in 1948 – I would even put its roots as a highly-militarized society back to the start of the twentieth century. It has been over the past 125 years of settler colonialism that the Israeli Security State emerged. Israel’s ongoing war against the internal/external Palestinian people/enemy, with all the inherent insecurity and preoccupation with security that engenders, placed it just where post-9/11 America wanted to be. Israel provided the US – and particularly the US police and security agencies – with ready-made policies, doctrines, para-military structures, and weaponry they lacked but needed in order to construct an American Security State. Israel provided the model and the hardware.

But what was the problem? Why couldn’t the US just enact the policies, create the structure and produce the weapons conducive to a Security State, especially now that it has the “homeland security” justification? The answer is akin to the notion of color-blindness. In The New Jim Crow, Michelle Alexander describes the dilemma of enforcing policies of racial repression at a time (from the 1960s and ‘70s) when outright expressions of racism were no longer acceptable. She documents how the War on Drugs co-opted the racial agenda but under the rubric of fighting drugs, which few could argue with. The US had the same problem in its transition to a Security State. How could it subordinate civil liberties in favor of policing while retaining its image as a democracy?

Specifically, the “problem” facing the US in empowering its police to engage in homeland security was the wall erected by the Posse Comitatus Act of 1878. Like similar laws and regulations in other European states, the Posse Act strictly separates domestic law enforcement (internal security) from the deployment of the military (external security). It looks something like this: 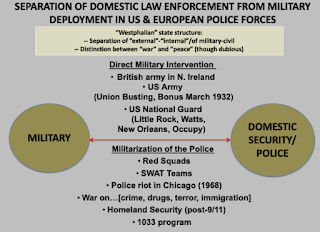 This doesn’t mean that the military cannot be deployed domestically. The National Guard plays that role occasionally. But for the real military to be called out, as Trump tried to do in Washington, DC, an obscure 1807 Insurrection Act had to be invoked, and the Pentagon refused.

So even though US companies have the capability of producing military weapons, the “wall” has placed constraints on them from developing military-style police arms. This opens a huge market for Israel, not only custom-tailoring military weapons for law enforcement, but for the civilian market as well. The Israeli Weapons Industry (IWI) has opened a manufacturing plant in Middletown, PA, where it produces, for example, a pistol-sized Uzi submachine gun or police. That plant produces a wide variety of militarized weapons for law enforcement, including lines of Galil and Tavor assault rifles and a tactical rifle called the Zion-15. (Take a look at the IWI US website.) Israel is also the world’s leader in drones, producing 60% of the global market. Drones are becoming staples of US police departments, but here, too, the “wall” poses a challenge: drones are commonly used for surveillance, but weaponized drones are still forbidden to US police.