An application by Harry Dunn's parents for the Foreign Office to disclose evidence relating to a "secret agreement" between the UK and US governments has been rejected. 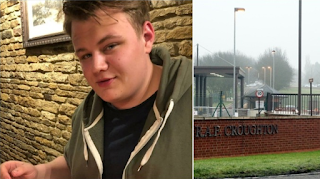 The Dunns said the agreement had given diplomatic immunity to their son's alleged killer, Anne Sacoolas.

The 19-year-old was killed in a crash in Northamptonshire.

At the High Court, Lord Justice Flaux [Supreme coward and arse-licker] said disclosure was not necessary for the "just determination" of the case.

Mr Dunn died when his motorbike was involved in a crash outside RAF Croughton in August last year.

Despite being charged with causing death by dangerous driving in December, an extradition request was refused by the US.

At a preliminary hearing on Thursday, conducted by video call, the Dunns argued the Foreign Office "acted unlawfully by proceeding as if Anne Sacoolas conclusively had immunity".

They said that action prevented Northamptonshire Police "from reaching an informed view" on immunity.

Geoffrey Robertson QC, representing the Dunns, told the court the Foreign Office had "obstructed a criminal investigation, under pressure from the United States".

Mr Robertson said the case "turns on the interpretation of a secret agreement made in 1995 between America and the UK, as a result of a US request to add up to 200 technical officers as diplomatic agents at RAF Croughton".

He said at the time the UK had been "deeply concerned" about the request and the danger of media interest if crimes - particularly road traffic-related crimes - were committed.

He argued the Foreign Office had "given extensive disclosure, well in excess of what is strictly required".

Mr Robertson asked the court to order the Foreign Office to disclose documents about the 1995 agreement, as well as notes of phone calls and messages about Mr Dunn's death involving Foreign Office officials.

The application was rejected by Lord Justice Flaux and Mr Justice Saini.

A full hearing will take place in October or November.