Mexico’s oligarchs and establishment political parties have united in a secret alliance to try to remove left-wing President López Obrador from power, with help from the media, Washington, and Wall Street. Leaked documents lay out their devious strategy. 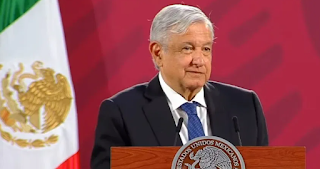 Some of the most powerful forces in Mexico are uniting in a campaign to try to topple the country’s first left-wing president in decades, Andrés Manuel López Obrador. And they apparently have support in Washington and on Wall Street.

Known popularly as AMLO, the Mexican leader is a progressive nationalist who campaigned on the promise to “end the dark night of neoliberalism.” He has since implemented a revolutionary vision he calls the “Fourth Transformation,” vowing to fight poverty, corruption, and drug violence — and has increasingly butted heads with his nation’s wealthy elites.

López Obrador has also posed a challenge to the US foreign-policy consensus. His government provided refuge to Bolivia’s elected socialist President Evo Morales and to members of Evo’s political party who were exiled after a Trump administration-backed military coup.

AMLO also held a historic meeting with Cuba’s President Miguel Díaz-Canel, and even stated Mexico would be willing to break the unilateral US blockade of Venezuela and sell the besieged Chavista government gasoline.

These policies have earned AMLO the wrath of oligarchs both inside and outside of his country. On June 18, the US government ratcheted up its pressure on Mexico, targeting companies and individuals with sanctions for allegedly providing water to Venezuela, as part of an oil-for-food humanitarian agreement.

The value of the Mexican peso immediately dropped by 2 percent following the Trump administration’s imposition of sanctions.

These opening salvos of Washington’s economic war on its southern neighbor came just days after López Obrador delivered a bombshell press conference, in which he revealed that the political parties that had dominated Mexican politics for the decades before him have secretly unified in a plot to try to oust the president, years before his democratic mandate ends in 2024.

The forces trying to remove AMLO from power include major media networks, massive corporations, sitting governors and mayors, former presidents, and influential business leaders. According to a leaked document, they call themselves the Broad Opposition Bloc (Bloque Opositor Amplio, or BOA).

And they say they have lobbyists in Washington, financial investors on Wall Street, and major news publications and journalists from both domestic and foreign media outlets on their team.