Even the State Department knows what drives Palestinian Violence! 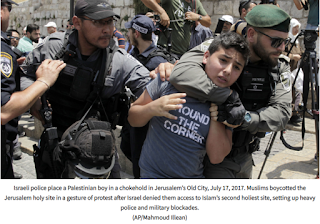 The US State Department’s annual terror report offers a surprising amount of criticism of Israel, uncharacteristic for the Trump Administration, which has made a point of being outspokenly favorable toward the Israeli government from day one.

The report detailed several lone-offender attacks by Palestinians against Israelis, as it does every year. But the report went a lot further, saying that Israeli government policy toward the Palestinians was in no small part driving the violence.

On top of that, the State Department reported credited the Palestinian Authority for its efforts to prohibit “incitement” and for making serious efforts to prevent terrorism.

Such a recognition is also uncharacteristic for the US, and is likely to anger Congressional Republicans, who’ve been pushing for a US crackdown on the Palestinians as a way to show support for Israel.