Purdue and the Story of OxyContin

Netflix’s latest offering, ‘The Pharmacist’ is a tale of true-justice that sheds light to America’s devastating opioid epidemic at its infancy. The past decade has witnessed drugs destroying over half a million lives across the country. But where did it all begin? For several thousands, the answer was OxyContin; an opioid medication used to treat severe pain.

The four-part docuseries centres around Dan Schneider, a father who lost his only son to drug related violence, and his efforts to make his community drug-free. As a pharmacist, he begins to notice the growing abuse of OxyContin and its addiction, tracing almost all prescriptions to a single doctor. Schneider eventually manages to collaborate with the authorities and shut down the most notorious “pill mill” in New Orleans’ history. But the doctor behind the unethical operation is merely a pawn.

The real perpetrators still walk free despite killing thousands. The perpetrators in question are the Sacklers who owned Purdue Pharma, and everyone else who was complicit. Not only did they introduce the drug in the market, but they sold it excessively despite being aware of its harms. In fact, they marketed the product with misleading and false information. In many ways, Purdue Pharma’s OxyContin can be seen as the genesis of the current opioid epidemic in the country. But what happened to Purdue Pharma after all that it led to? Is it still in business? Here’s everything you need to know.

The controversial pharmaceutical company was founded in 1892 by two doctors, John Purdue Gray and George Frederick Bingham. But it was incorporated as Purdue Pharma L.P. only in 1991, under the Sacklers, shifting its focus majorly to pain management medication, calling themselves “pioneers” in the field. OxyContin, was first introduced in 1995, and can be considered Purdue’s breakthrough drug for chronic pain relief.

The company aggressively marketed the drug, despite it being an opioid, pressing doctors to prescribe it, and the drug was an instant success. It was meant to offer 12 hour of pain relief because of its time-release properties, with low abuse potential, and less than 1% chance of addiction. This was, of course, not backed with clear scientific evidence. In contrast, there has been over centuries worth of evidence that suggests the highly addictive nature of opioids. It’s also been recorded that most overdose deaths are attributed to this drug.

Oxycontin was soon being used as a substitute to heroin, with its high potential of being abused when injected, crushed or snorted. Doctors soon became dope dealers in white coats, and “doctor shopping” became a thing. Individuals would go to various doctors to get prescription the painkiller, and then abuse it, and deal with it. Along with this, several innocent individuals who were suffering from severe pain too became addicts. 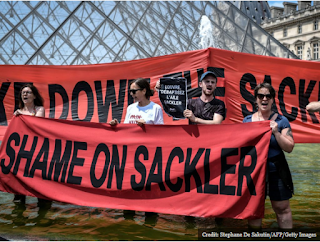 In an article by The New York Times in 2018, it became known that Purdue Pharma was aware of OxyContin’s abuse in the early days. In fact, the company had reports of these, including how the drug was being stolen from pharmacies. There were apparently over a hundred internal memos before 2000 that spoke of the drug’s “street value”, and how it was being crushed and snorted. There were also reports relating to its withdrawal symptoms that made patients addicted to the medicine. Along with this, studies later showed that 76% of the people seeking help for heroin addiction began by primarily abusing OxyContin.

The past years have seen over 2,800 lawsuits against Purdue Pharma for devastating thousands of life and fueling the opioid addiction in America. In 2007, the company finally pleaded guilty to federal charges that it misled the public despite being aware of the drug’s harm, and that it deceptively marketed OxyContin as non-addictive. This eventually led to one of the largest pharmaceutical settlements in America’s history as Purdue Pharma agreed to pay a fine of $600 million.

Along with this, members of the company, which included the company’s former president, lawyer and former chief medical officer, all pleaded guilty individually to misbranding charges. Certain other members were also charged with felony. But this was only the beginning. The company continued to be involved in lawsuits, and by January 2019, 36 states had sued Purdue Pharma. Unfortunately, the Sackler family has not yet felt brunt of of their actions.

In September 2019, Purdue Pharma filed for Chapter 11 bankruptcy, which potentially gives the company a fresh start. According to this agreement, the company would be restructured as public beneficiary trust, while the Sacklers would give up complete ownership. The company and the family were in negotiations to settle the claims for a payment of $10-12 billion, along with all profits of Purdue going to the plaintiffs in the case. The company is also supposed to give addiction-treatment drugs to the public free of cost. The Sacklers need to contribute another $3 billion in cash.

Unfortunately, the Sacklers would not be criminally charged for their role in the opioid epidemic, and remain a billionaire family. Recent reports have revealed that the family withdrew 10.7 billion from the company and spread them across their trusts and other companies. This has led to a much-needed scrutiny of the family’s finances.

From the 36 states that sued the company, around 24 have refused to sign the agreement because of the Sacklers’ current contribution, as they believe the family should pay more. The Sacklers were directly involved in creating, marketing and selling the drugs. Along with this, their actual worth has not been properly calculated. But it is widely believed that the family needs to pay a much bigger price for all the lives they’ve destroyed.