The School of the Americas is Still Going Strong – Its Purpose? To Keep Latin America Safe for US Multinationals

In 2001, after being in the public spotlight, the institution where so many torturers and mad dog dictators had learnt their skills was renamed the Western Hemisphere Institute for Security Cooperation. However the role it performed was exactly the same as it had been before.

In 1961, US President John Kennedy ordered the school to focus on teaching “anti-communist” counterinsurgency training to military personnel from Latin America. According to anthropologist Lesley Gill, the label ‘”communist” was a highly elastic category that could accommodate almost any critic of the status quo.

‘Beginning in 1961, Nicaraguan Dictator Anastasio Somoza sent Nicaraguan officers to the school to attend a 46-week course in their final year of training. Somoza himself made occasional visits to the school. In 1963 it changed its name from the U.S. Army Caribbean School to the School of the Americas.

According to Major Joseph Blair, a former instructor at the school, “the author of SOA and CIA torture manuals […] drew from intelligence materials used during the Vietnam War that advocated assassination, torture, extortion, and other ‘techniques’.”[ The authors of the manuals “believed that oversight regulations and prohibitions applied only to U.S. personnel, not to foreign officers.” Use of the manuals was suspended under Jimmy Carter over concerns about their correlation to human rights abuses but were reinstated under Ronald Reagan. 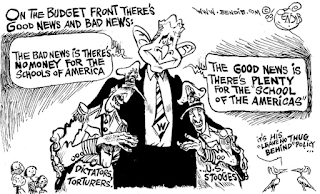 Between 1970 and 1979, cadets from Chile, Colombia, Bolivia, Panama, Peru, and Honduras made-up 63% of the school’s students. In 1980, the United States increased economic aid to Honduras. Journalist Ray Bonner reported that much of this aid would go toward training military officers at the School of the Americas and training programs within the continental United States. Hundreds of Hondurans were trained at the school during the 1980s, when the country became increasingly critical to Reagan’s efforts to overthrow and defeat the Nicaraguan Sandinistas and other revolutionary guerrilla movements in the region. During the 1980s, Mexico, El Salvador, and Colombia made-up 72% of the school’s cadets.

School of the Americas Watch is an advocacy organization which was founded by Father Roy Bourgeois and a small group of supporters in 1990 to protest the training of mainly Latin American military officers by the School of the Americas (SOA). SOA Watch conducts a vigil each November at the site of SOA, located on the grounds of Fort Benning, a U.S. Army military base near Columbus, Georgia, to protest human rights abuses committed by some graduates of the academy or under their leadership, including murders, rapes and torture and contraventions of the Geneva Conventions.

Military officials state that even if graduates commit war crimes after they return to their home country, the school itself should not be held accountable for their actions. Responding to “mounting protests” spearheaded by SOA Watch, in 2000 the United States Congress renamed the School of the Americas the Western Hemisphere Institute for Security Cooperation (WHINSEC), rather than closing the academy. In addition, all students must undergo a minimum of eight hours of class on human rights and the principle of civilian control of the military. 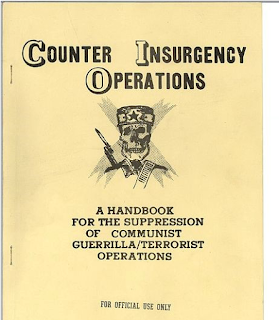 Inspired by the case of slain Archbishop Óscar Romero, who said “we who have a voice must speak for the voiceless,” former priest Roy Bourgeois, Larry Rosebaugh OMI, and Linda Ventimiglia posed as military officers and crossed into Ft. Benning in 1983. They climbed a tree near the barracks housing Salvadoran troops and read the final homily of Archbishop Oscar Romero through megaphones. Bourgeois and his companions were arrested and Bourgeois was sentenced to 18 months in prison for trespassing onto Federal property. Protesting against the teaching of torture is an offence in the United States!

Following the November 1989 murders of six Jesuit priests, their housekeeper and her daughter at the Central American University in El Salvador in which graduates of the School of the Americas were involved, SOA Watch organized an annual protest to be held on the anniversary of the massacre beginning the next year. The event has been held every year since then.