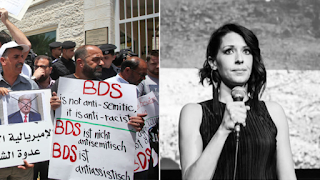 Barred from speaking at a public university over her refusal to sign a pledge of allegiance to Israel, journalist Abby Martin is now suing the state of Georgia, arguing its anti-BDS legislation sets fire to the First Amendment.

Slated to give a keynote talk at a media literacy conference at Georgia Southern University later this month, Martin was asked to sign what amounts to a loyalty oath to the State of Israel, mandated under a 2016 Georgia law barring the government from hiring contractors who boycott Israeli products or associate with the global Boycott, Divestment and Sanctions (BDS) movement. Martin told RT she was “shocked” when she saw what she was asked to sign.

“I was not anticipating this whatsoever,” she said. “I was aware of the issue – I’ve talked about how over two dozen states have employed this measure for independent contractors – but I just never connected the two.”

Declining to sign the pledge, explaining that pro-Palestine activism is “central” to her work, the university swiftly called off Martin’s talk. When her colleagues came to her defense, the entire event was shut down, a move she says is “emblematic of the state of academic freedom in the United States at large,” where similar laws have been passed in 28 states.

“I think that’s really interesting, because there’s essentially no discussion on left-wing speakers like myself discussing issues like Palestine, which are literally being blocked on the state level,” Martin said, calling the censorship a “direct violation of the First Amendment.”

With right-of-center organizations like the American Legislative Exchange Council (ALEC) and the Heritage Foundation pushing ‘free speech acts’ on college campuses across the country to protect conservative speakers, Martin said the anti-BDS laws are clearly hypocritical, wielded to blot out certain viewpoints and control the public narrative around Israel.

“There’s a stark hypocrisy going on when it really isn’t about free speech at all,” she said.

Shut out of Georgia Southern University solely due to her political views, Martin filed a lawsuit against the state on Monday, insisting her First Amendment rights were being trampled in the decision to cancel her talk. The former RT host said she’s “confident” about the case, hoping it will mean that “no independent contractors will have to forfeit their civil liberties and constitutional rights in order to just work in the state.”

These are laws that should never have been passed in the first place. This is the fault of state legislatures that have passed these laws in direct violation of the US Constitution.

There is hope for the suit. Last April, a Texas judge blocked the state government from enforcing a similar anti-BDS law, ruling it an “impermissible content- and viewpoint-based restriction on protected expression,” which sought to “manipulate the debate [around Israel] through coercion rather than persuasion.”

Martin faces an uphill battle, however, with many forces arrayed against her cause – in the US and beyond. With the Israeli prime minister’s office admitting in a tweet this week that Tel Aviv has “promoted [anti-BDS] laws in most US states,” overturning the legislation could mean competing with a powerful foreign lobby, in addition to fighting it out in the courts.