Chris Wallace, the host of Fox News Sunday, asked the Vermont Senator, who identifies as a social democrat, an ubiquitous question about him being slammed by his opponents as a communist. The program played a clip of Trump saying that he thinks “he is a communist.” 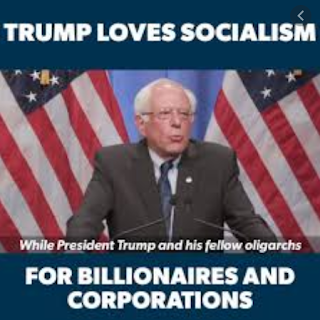 “I think of communism when I think of Bernie. You can say socialist. Didn’t he get married in Moscow?” he said at one of the rallies. Sanders laughed in response and called Trump a “pathological liar.”

“No, I did not get married in Moscow. I participated in creating a sister city program,” he said.

Obviously, I am not a communist. I presume the president knows the difference. Maybe he doesn’t.

Taking a more serious tone Sanders explained that the US was a socialist society with a huge budget allocated to different areas.

“Donald Trump, before he was president, as a private business person, he received $800 million in tax breaks and subsidies to build luxury housing in New York. Now, what does that mean when the government gives you $800 million in tax breaks and subsidies?” Sanders wondered explaining that the fossil fuel industry and the pharmaceutical industry are enjoying the same brakes.

“The difference between my socialism and Trump’s socialism is I believe the government should help working families, not billionaires,” he said.

Sanders is leading in many polls ahead of New Hampshire primary next week, he is in tie with Pete Buttigieg in Iowa where count was botched by a faulty app and results delayed by several days.