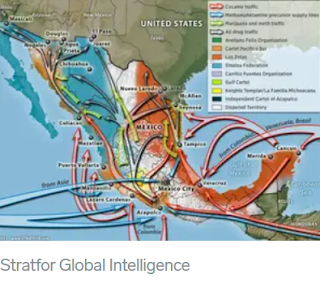 The anti-secrecy group Wikileaks began publishing more than five million internal emails from the U.S. based private intelligence company, Stratfor on Sunday. It includes a memo allegedly written by George Friedman, the CEO of the company that reads like something out of a spy novel.

The document is allegedly Friedman’s own wry rundown of intelligence lingo that his employees use in their work for corporate and government clients.

The document dump explains that an "All-Source Fusion Cell" is: "A trans-compartmentalized group of analysts who get to see everything and have to make sense of it. Don't wish it on your worst enemy."

A "Barium Meal" is defined this way: "When there is a leak, feed bits of radioactive (traceable, false) information to suspects. See which bit leaks. You will know who leaked it. The leaker will know you know. Livens up a dull day like nothing else we’ve ever seen. Bring the kids."

And a “Code Crypt,” in turn, is described as “the code name and control of a source in encrypted form. If this confuses you, it’s working.”

The spy lingo glossary is just one document amid an enormous cache from Stratfor, an Austin, Texas-based private intelligence company that counts government agencies and some of the world’s biggest companies among its clients.

In a press release late Sunday, Wikileaks said the emails “reveal the inner workings of a company that fronts as an intelligence publisher, but provides confidential intelligence services to large corporations, such as Bhopal's Dow Chemical, Lockheed Martin, Northrop Grumman, Raytheon and government agencies, including the U.S. Department of Homeland Security, the U.S. Marines and the U.S. Defense Intelligence Agency.”

"The emails show Stratfor’s web of informers, pay-off structure, payment-laundering techniques and psychological methods," the Wikileaks press release said. The organization claimed that the emails expose "how Stratfor has recruited a global network of informants who are paid via Swiss banks accounts and pre-paid credit cards. Stratfor has a mix of covert and overt informants, which includes government employees, embassy staff and journalists around the world."