The Far-Right Is Going Global

An unofficial visit by nationalist European leaders to Kashmir highlights the solidarity of far-right movements across the globe. 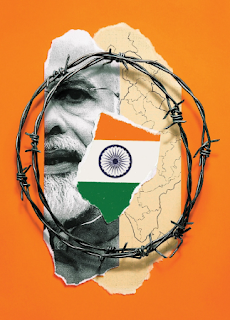 In October 2019, 23 members of the European Parliament (MEPs) visited Kashmir, just two months after the Indian government removed the region’s special autonomous status. The trip sparked controversy when it was revealed that most of the MEPs belonged to far-right political parties, including France’s National Rally (formerly National Front) and Germany’s Alternative für Deutschland (AfD). It wasn’t just the affiliations of these visitors that drew attention: The MEPs had been granted access to Kashmir even as foreign journalists and domestic politicians were barred access to the region, and the Indian-administered government had imposed an internet shutdown since August.

This visit was the latest example of the growing ties between the far-right in India and Europe, a connection that is rooted primarily in a shared hostility toward immigrants and Muslims, and couched in similar overarching nationalistic visions. Today, with the populist radical right ascendant in India and in several European democracies, the far-right agenda has been increasingly normalized and made a part of mainstream political discourse.

Similarly, European ideologues like Savitri Devi (born in France as Maximiani Portas) described Hitler as an incarnation of the Hindu god Vishnu. Nearly four decades after she died, her ideology remains popular among American white nationalists. The manifesto of Anders Behring Breivik, the Norwegian terrorist who killed 77 people in 2011, also expressed an affinity for the Hindu nationalist approach to Islam that highlights many contemporary European attitudes toward Muslim immigrant populations.

“The only positive thing about the Hindu right wing is that they dominate the streets. They do not tolerate the current injustice and often riot and attack Muslims when things get out of control, usually after the Muslims disrespect and degrade Hinduism too much,” Breivik wrote before bombing a government building in Oslo and killing dozens of children at a summer camp. “India will continue to wither and die unless the Indian nationalists consolidate properly and strike to win. It is essential that the European and Indian resistance movements learn from each other and cooperate as much as possible. Our goals are more or less identical.” [my emph.]

More recently, Steve Bannon, the former White House chief strategist and editor in chief of the far-right site Breitbart News Network, had considered creating a Breitbart India in 2015 after Narendra Modi became prime minister of India. Bannon has long admired Modi, once calling him “a Trump before Trump.” Meanwhile, European supporters of Modi and his nationalist message include the leader of the Dutch far-right Party for Freedom (PVV) Geert Wilders.

The MEPs’ visit to Kashmir sheds light on the solidarity of the global far-right. Although they were sent invitations on behalf of Madi Sharma, a Brussels-based entrepreneur and president of the NGO Women’s Economic and Social Think Tank (WESTT), the visit itself was funded and organized by an NGO registered in New Delhi called the International Institute for Non-Aligned Studies (IINS)—a group that shares the same IP address as the obscure news website New Delhi Times.

This website, in turn, is connected to a global network of think tanks, companies, NGOs, and, significantly, over 265 local media outlets in 65 countries. EU DisinfoLab, which conducts research on disinformation campaigns targeting European Union member states, recently concluded that the media outlets tied to the New Delhi Times are attempting to influence international institutions and elected representatives.

While the ideological leanings of the New Delhi Times are unclear, its network of media outlets syndicate content criticizing Pakistan’s role in Kashmir, and they regularly take Islamophobic editorial stances. Although those positions are not unusual in the Indian media landscape, it is rare for such outlets to lobby on a global scale. Two notable websites in this network—EP Today and Times of Geneva—maintain strong connections to NGOs and think tanks in Brussels and Geneva, in effect serving as lobbying interests to the EU and the United Nations.

Sharma promised invitees “a prestigious VIP meeting” with Modi in addition to their trip to Kashmir. The MEPs stated that the purpose of the visit was to “gather information” on the situation in Kashmir. Although the MEPs were technically an unofficial delegation, they received clearance not just to tour Kashmir, but also to meet with several senior members of the Indian government and military. Government ministries have publicly stated that they were not involved in arranging the visit, although it is unlikely that such clearance could have been obtained without approval from high-level authorities.

Before visiting Kashmir, the MEPs went to New Delhi to meet Modi, who said that the delegation would gain “a better understanding of the cultural and religious diversity of the region.” While in Kashmir, the European delegation went on a guided tour through the capital of Srinagar before having lunch at the Indian Army Headquarters, where they saw maps of supposed terrorist training camps in Pakistan, where attacks in Kashmir are allegedly plotted.

Several MEPs, including far-right Czech MEP Tomas Zdechovsky and National Rally MEP Thierry Mariani, later used social media to share their experience meeting the prime minister; Mariani, for example, tweeted in support of the Indian government’s policy in Kashmir. Mariani also told reporters that “we stand with India in its fight against terrorists,” while AfD MEP Lars Patrick Berg accused the media of branding them “Muslim-hating Nazis.” Both Mariani and Berg have called for stronger border security in the EU, linking migration to potential Islamist terrorist attacks.

The Kashmir issue is a rallying cry for much of Europe’s far-right. Europe’s nationalists share a deep concern over Islamist extremism, as well as an overarching vision of national strength. In many ways, they see Modi’s hardline stance in Kashmir as indicative of their own aims.

The latest crisis in Kashmir began when Modi’s government revoked Article 370 of the Indian Constitution, thereby removing Jammu and Kashmir’s special autonomous status. Wilders openly tweeted his support of the revocation of Kashmir’s autonomy the day it was announced. The British columnist Katie Hopkins also expressed solidarity and has more recently claimed that Hindus are the victims of ethnic cleansing in Kashmir.

The Kashmir issue is a rallying cry for much of Europe’s far-right. Europe’s nationalists share a deep concern over Islamist extremism, as well as an overarching vision of national strength.

The immediate pretext for Modi’s move was brewing unrest in the region. An ongoing separatist insurgency has gripped Kashmir since 1989, and Pakistan has played a substantial role supporting violent separatist groups in the region. Islamist terrorist attacks remain an everyday reality on the ground, and they have sometimes spilled over into India itself. This includes the 2008 Mumbai attacks, in which Lashkar-e-Tayyiba, a Pakistan-based Islamist group seeking Kashmiri unification with Pakistan, launched a massive attack in Mumbai killing 164 people.

The situation continued to escalate in February 2019, when Pakistan’s Air Force launched a series of airstrikes in Indian-controlled Kashmir, leading to Indian retaliation. Periodic airstrikes have been conducted intermittently since—arguably boosting Modi’s popularity with his base and helping him win reelection last year.

Although the pretext for the constitutional change was regional unrest, there are broader goals. Hindu nationalists have long sought to expand India’s territorial reach into what was once British-controlled India—including not only Kashmir but also Pakistan, Bangladesh, and other parts of South Asia.