Is the US heading towards a FOUR party system? 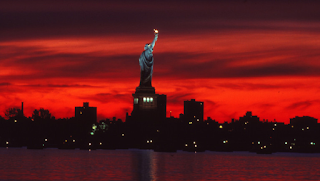 Despite Trump’s impeachment victory, the US is entering into an ideological civil war, because the real conflict is not between the Democrats and the Republicans, but within each of those parties themselves. Two weeks ago, while promoting his new film in Mexico City, Harrison Ford said that “America has lost its moral leadership and credibility.”

Really? When did the US exert moral leadership over the world? Under Reagan or Bush? They lost what they never had, ie, they lost the illusion (the “credibility” made in Harrison’s claim) that they’ve had it. With Trump, what was already true merely became visible.

Back in 1948, at the outset of the Cold War, this truth was formulated with brutal candor by US diplomat and historian George Kennan: “[The US has] 50 percent of the world’s wealth but only 6.3 percent of its population. In this situation, our real job in the coming period…is to maintain this position of disparity. To do so, we have to dispense with all sentimentality…we should cease thinking about human rights, the raising of living standards and democratisation.”

In this we find an explanation of what Trump means by “America first!” in much clearer and more honest terms. So we should not be shocked when we read that “the Trump administration, which came into office pledging to end ‘endless wars,’ has now embraced weapons prohibited by more than 160 countries, and is readying them for future use. Cluster bombs and anti-personnel landmines, deadly explosives known to maim and kill civilians long after fighting has ended, have become integral to the Pentagon’s future war plans.”

Those who act surprised by such news are simply hypocrites: in our upside-down world, Trump is innocent (not impeached) while Assange is guilty (for disclosing state crimes).

So what IS going on now?

It’s true that Trump exemplifies the new figure of an openly obscene political master in disdain of the basic rules of decency and democratic openness.

The logic that underlies Trump’s actions was spelled out by Alan Dershowitz (who is, among other things, an advocate of legalized torture). The Harvard Law professor stated that if a politician thinks his re-election is in the national interest, any actions he takes towards that end cannot by definition be impeachable. “And if a president did something that he believes will help him get elected, in the public interest, that cannot be the kind of quid pro quo that results in impeachment,” Dershowitz argues.

The nature of power out of any serious democratic control is clearly spelled out here.

What was taking place in the ongoing debates about Trump’s impeachment was a case of the dissolution of the shared common ethical substance which makes argumentative polemical dialogue possible: the US is entering into an ideological civil war in which there is no shared ground to which both parties to the conflict can appeal – the more each side elaborates its position, the more it becomes clear that no dialogue, even a polemical one, is possible.

We shouldn’t be too fascinated by the theatrics of the impeachment process (Trump refusing Pelosi’s handshake, Pelosi tearing up a copy of his State of the Union address) because the true conflict is not between the Democrats and the Republicans but within each of the parties.

The US is now transforming itself from a two-party state into a four-party state: there are really four parties that fill in the political space - the establishment Republicans, establishment Democrats, alt-right populists and democratic socialists.

There are already offers of coalitions across party lines: Joe Biden hinted that he might nominate as his vice-president a moderate Republican, while Steve Bannon mentioned, a few times, his ideal of a coalition between Trump and Sanders.

The big difference is that, while Trump’s populism easily asserted its hegemony over the Republican establishment (a clear proof, if one was ever needed, that, in spite of all Bannon’s ranting against the “system,” Trump’s reference to ordinary workers is a lie), the split within the Democratic party is getting stronger and stronger – no wonder, since the struggle between the Democratic establishment and the Sanders wing is the only true political struggle going on.

To use a little bit of theoretical jargon, we are thus dealing with two antagonisms (“contradictions”), the one between Trump and the liberal establishment (this is what the impeachment was about), and the one between the Sanders wing of the Democratic Party and all the others.

The move to impeach Trump was a desperate attempt to regain the moral leadership and credibility of the US – a comic exercise in hypocrisy. This is why all the moral fervor of the Democratic establishment should not deceive us: Trump’s open obscenity just brought out what was always there. The Sanders camp sees this clearly: there is no way back, US political life has to be radically reinvented.

But is Sanders a true alternative or, as some “radical Leftists” claim, is he just a (rather moderate) social democrat who wants to save the system? The answer is that this dilemma is false: Democratic Socialists started a mass movement of radical re-awakening, and the fate of such movements is not predestined.

Only one thing is certain: the worst imaginable stance is the one of some Western “radical Leftists” who tend to write off the working class in developed countries as a “workers’ aristocracy” living off the exploitation of developing countries and caught in racist-chauvinist ideologies. In their view, the only radical change can come from “nomadic proletarians” (immigrants and the poor of the Third World) as a revolutionary agent (maybe linked to some impoverished middle-class intellectuals in developed countries) – but does this diagnosis hold?

True, today’s situation is global, but not in this simplistic Maoist sense of opposing bourgeois nations and proletarian nations. Immigrants are sub-proletarians, their position is very specific, they are not exploited in the Marxist sense and are as such not predestined to be the agents of radical change. Consequently, I consider this “radical” choice suicidal for the Left: Sanders is to be unconditionally supported.

The battle will be cruel, the campaign against Sanders will be much more brutal than the one against Corbyn in the UK. On the top of the usual card of anti-Semitism, there will be wide use of the race and gender cards – Sanders as on old white man… Just recall the brutality of Hillary Clinton's latest attack on him.

And all these cards will be played on grounds of a fear of Socialism. Critics of Sanders repeat again and again that Trump cannot be beaten from his (Sanders’) all-too-leftist platform, and the main thing is to get rid of Trump. To this we should just answer that the true message hidden in this argument is: if the choice is between Trump and Sanders, we prefer Trump…