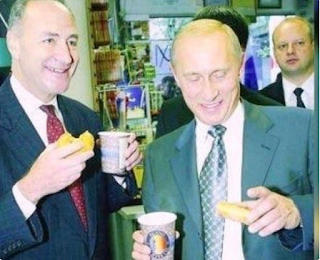 Penetration of Mordor by Russian spies appears more far-reaching than originally thought. Now we have strong evidence (photo above) that Chuck Schumer is in the pay of Russian intelligence services too. Although in Chucky's case he may be a double agent: Russia/Israel.

This Traitor must be investigated at once by an impartial body!

But seriously though, from reason.com:

Now that the two conversations with Kislyak have been revealed, Democrats and media are shouting "gotcha." And if there was, in fact, election talk in these meetings, Sessions should recuse himself from any investigations into Russian meddling in U.S. elections. The fact that he's very nearly confessed to being a Trump surrogate is reason enough for some red flags to go up already.

But meetings between U.S. officials and foreign ambassadors, even of countries many insist are "hostile," are par for the course. The U.S. should engage with any country willing to engage, on any issue where there might be convergence. The U.S. and Russia, recent anti-Russia hysteria aside, have complex relations. In the last year, the Russian ambassador to the U.S. met with, among others, the administrator of NASA and the governor of Tennessee (though neither of these appeared to be unforthcoming about their meetings). Last month he was scheduled to attend a physics conference also attended by Los Alamos scientists.