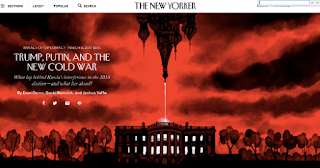 The most astonishing aspect of the post-election discourse on Russia is how little attention is paid to the risks of fueling a new Cold War, let alone of military confrontation between the two nuclear-armed powers. A different New Yorker article in December, by Eric Schlosser, described how many times the two countries came quite close to nuclear annihilation in the past, and how easy it is now to trigger a nuclear exchange merely by miscommunication or misperception, let alone active belligerence:

Today, the odds of a nuclear war being started by mistake are low—and yet the risk is growing, as the United States and Russia drift toward a new cold war. . . . The harsh rhetoric on both sides increases the danger of miscalculations and mistakes, as do other factors. Close encounters between the military aircraft of the United States and Russia have become routine, creating the potential for an unintended conflict.

Constantly ratcheting up aggressive rhetoric and tension between Washington and Moscow is not a game. And yet it’s one that establishment Democrats – and their new allies in the war-loving wing of the GOP – are playing with reckless abandon, and with little to no apparent concern about the risks. They have re-created a climate in the U.S. where a desire for better relations with Russia triggers suspicions about one’s loyalties.