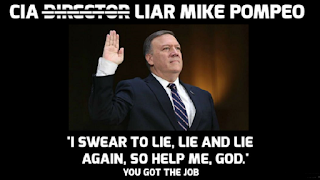 US Secretary of State Mike Pompeo has been accused of meddling in Britain's domestic politics after he was caught on tape saying that the US should “push back” against Jeremy Corbyn, the leader of the UK's Labour Party.

According to US media reports, Pompeo made his remarks during a closed-door meeting with American Jewish leaders, where he was asked if Corbyn “is elected, would you be willing to work with us to take on action if life becomes very difficult for Jews in the UK?”

To which Pompeo replied: “It could be that Mr. Corbyn manages to run the gauntlet and get elected. It's possible. You should know, we won't wait for him to do those things to begin to push back. We will do our level best. It's too risky and too important and too hard once it's already happened,” according to the Washington Post, which published the leaked recordings.

The Labour Party has been accused of being anti-Semitic, as some party figures have made comments targeting Jews. Corbyn himself has been criticized for accusing Israel of human rights abuses against the Palestinians, but the Labour leader says he wants to see justice for the Palestinian people.

“Mr. Corbyn has consistently fought for Palestinian rights in the face of widespread opposition from politicians in both the United Kingdom and the USA. The Israeli government does not want to see 'Prime Minister Corbyn', nor does the US government. It is against their interests in the region,” Matt Turner, commentator and former Evolve Senior Editor stressed.

The commentator also said that Pompeo “will be doing his utmost to stop Jeremy Corbyn (from) becoming Prime Minister, as Corbyn represents a break away from the interventionist foreign policy consensus that Donald Trump and the USA represent”.

Freelance journalist Alex Tiffin believes it's important that Mike Pompeo's comments about “pushing back” on Jeremy Corbyn shouldn't be overlooked.

“The United States has a long history of interfering in other countries' political affairs when they don't like things. You only have to look at Venezuela recently for evidence of this,” said the journalist. “It smacks of hypocrisy after all the US intelligence community accused the Russian government of meddling in the 2016 US presidential election.”

Journalist and columnist Danielle Ryan noted that these remarks shouldn't be taken as a meaningless comment, as there's enough reasons to believe that “Pompeo was entirely serious about the US taking steps to hurt Corbyn's chances and probably is doing so in an underhanded ways already.”