Campaigners have won a legal challenge over the UK government's decision to allow arms sales to Saudi Arabia, which is engaged in the war in Yemen.

Campaign Against Arms Trade argued the decision to continue to license military equipment for export to the Gulf state was unlawful.

It said there was a clear risk the arms might be used in a serious violation of international humanitarian law.

Judges said licences should be reviewed but would not be immediately suspended.

International Trade Secretary Liam Fox said the government would not grant any new licences for export to Saudi Arabia and its coalition partners while it considers the implications of the judgment.

A spokeswoman for Prime Minister Theresa May said the government was "disappointed" and would be seeking permission to appeal against the judgement.

It is of course the charming Dr Liam Fox, expenses embezzler and breacher of parliamentary rules, who'll do the appealing.

Cos' there's nothing like a MEDICAL doctor and millionaire, advocating selling lethal weapons to the Saudi House of criminals! 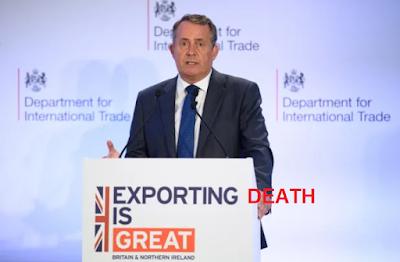 Herr Fox, you are truly SCUM!