E.W Jackson Thinks He’s the Victim of a ‘Homocracy’ Conspiracy

Right-wing pastor and radio host E.W. Jackson says that he has been temporarily suspended from using his Twitter account, reportedly over an anti-Muslim tweet he sent out in response to the multiple terrorist attacks that occurred in Sri Lanka on Easter Sunday. But on his radio program yesterday, Jackson shared his suspicion that his suspension was not really due to this particular tweet, but rather that it was payback for the statement he made on his radio program last week when he claimed that if Pete Buttigieg is elected president, he’ll seek to turn America into a “homocracy.” 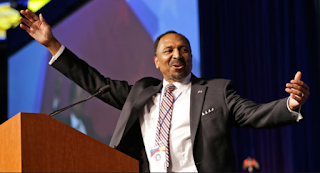 “I’ve got another theory for why this has happened,” Jackson said. “I don’t think it’s the one [tweet] they’re claiming. I think this is an excuse … I think what they really suspended me over is the homocracy comment because that thing has just absolutely taken social media by storm. It has gone viral and they’re all talking about it, just about every left-wing rag on the internet you can find is commenting about me.”

“I pointed out that what they really want is a homocracy,” he continued, “and they have gone crazy and I think that is what Twitter is upset about … I think that’s what’s behind the suspension. I really do. I don’t think it has anything to do with that comment, because that comment is about as innocuous as it gets. I’m just pointing out facts, but obviously the homocracy deal, that’s a little bit of a rhetorical flourish and a polemic and they don’t like it, because they don’t like anybody to speak the truth.”