An old anti-Zionist claims the Israelis have Hasbara while the Palestinians don't even have a word for 'spokesperson'. Below is a tale of Hasbara on steroids. 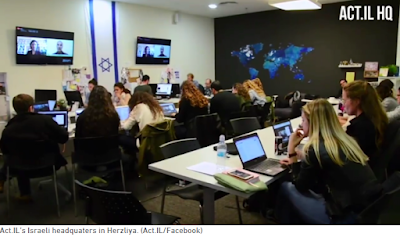 A global influence campaign funded by the Israeli government had a $1.1 million budget last year, a document obtained by The Electronic Intifada shows.

Act.IL says it has offices in three countries and an online army of more than 15,000.

In its annual report, from January, Act.IL says its goal is to “influence foreign publics” and “battle” BDS – the boycott, divestment and sanctions movement for Palestinian rights.

Through its app, Act.IL issues “missions” to this troll army in exchange for “cool prizes” and scholarships.

The app directs comments towards news websites in support of Israeli wars and racism, while attacking Palestinians and solidarity campaigners.

Act.IL’s report was obtained by The Electronic Intifada thanks to researcher Michael Bueckert.

Bueckert monitors the app, and posts screenshots of its missions to the Twitter account Behind Israel’s Troll Army.

The report was sent out to app users. You can read it the Electronic Intifada (the source of this post)