The journalist behind this week’s Panorama ‘exposé’ of Labour’s handling of antisemitism complaints has a history that will raise questions in the minds of neutral observers. Below are details.

The Murdoch Times has run a series of attacks recently on Labour’s handling of antisemitism complaints based on emails and data taken from the party by former employees.

Some of those former employees destroyed the same data and more when they quit after the resignation of former general secretary Iain McNicol – thousands of documents – drastically impeding the party’s ability to deal with those complaints and allowing the media to claim Labour had been lax in resolving them.

Now, former Sun and BBC journalist John Ware – who has written for a number of other right-wing publications – has made an episode of the BBC’s Panorama programme, claiming to examine the question, “Is Labour Anti-Semitic?”

The programme is expected to be largely a regurgitation of the Times attacks.

Déjà vu – even before Corbyn was leader

In 2015, before Corbyn’s victory in his first Labour leadership contest had even been confirmed, Corbyn’s campaign was forced to complain to the BBC about a ‘hatchet job’ by Ware. Prefiguring the latest attack, the hatchet-job took the form of a Panorama programme.

So extreme and transparent was the attack that it led even some of the mainstream media at the time to report that the usually-respected Panorama was being compared to Murdoch’s right-wing US propaganda outlet Fox News: 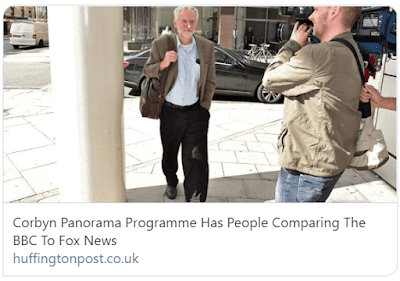 Ware has a long history of articles that have outraged and offended Muslims, leading to descriptions of him as a “notorious Islamophobe” “desperate to discredit Muslims“. So profound and widespread were the criticisms that in 2006 commentators were questioning the continued viability of the programme even as it was promoted to a prime viewing slot.

In one Panorama episode, Ware had accused a pro-Palestinian charity of being a front for terrorism. The following year, the BBC was forced to pay undisclosed damages to the charity’s former general manager for libel and to issue a public apology.

“The BBC apologises for any distress caused to him as a result of including his image in the programme. It is happy to confirm that there are no grounds to investigate whether Mr Yacub was a colleague or an associate of Dr Yusuf in relation to the funding and supporting of terrorist activity in breach of the Charity Commission rules.”

Accusations of Islamophobia did not end there. In 2015 – the same year as his first anti-Corbyn programme – he was heavily criticised for a Panorama episode accused of ‘othering’ Muslims as a threat to the UK. The programme led the Islamic Human Rights Commission to nominate Ware for an ‘Islamophobia award’, noting that he:

claims that anti-Semitism is “entirely irrational” however Islamophobia “is reactive.” And therefore also justifiable?

He had already ‘won‘ the award in 2005, after making a film attacking the Muslim Council of Britain (MCB) just after the ‘7/7’ London bombings. In 2015, he was nominated for treating Islamophobia as a reaction to something about Islam and Muslims, in contrast to ‘irrational’ antisemitism.

Ware’s libellous attack on pro-Palestinian charity Interpal led the MCB to describe him as “an agenda-driven pro-Israel polemicist“. But that does not mean Ware automatically defends all Jewish people.

In a 2013 film for the BBC, Ware referred often to ‘jihadists’ and ‘Islamists’ as a threat on Israel’s ‘hostile border’, but also found time to look askance at Ultra-Orthodox Jews who oppose zionism.

In an article for the Jewish Chronicle, Ware described such Ultra Orthodox Jews – who make up around a quarter of the UK’s Jewish population and are expected to represent more than half within fifteen or so years – as “marooned on Judaism’s farthest fringe“.

The 2013 documentary led to accusations that Ware had downplayed the scale of the Israeli occupation of the West Bank and attempted to demonise an Israeli Arab activist.

ten articles targeting Muslim peer Baroness Warsi, including one from last December that accuses her of “beating [a Muslim appointee] with a stick ever since her appointment last January“.

The SKWAWKBOX was unable to reach John Ware for comment.