We still think we can do anything, including win the war there. The reality is we can't and it's time to leave. 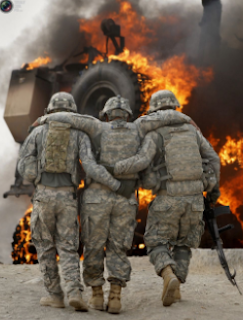 Nearly 20 years into our war in Afghanistan, we are no closer to winning than we were when the first U.S. airstrikes were launched on October 7, 2001.

So ill-defined and amorphous is our situation that Congress has consistently failed to recognize the conflict for what it is: a stalemate with no military victory in sight. In fact, there is no consensus on what victory in Afghanistan will look like or whether it’s even possible.

The next time your representative crows about his or her support for our veterans and troops, ask what he or she has done to ensure that America’s strategy in Afghanistan is sound. Ask why he or she remains comfortable continuing to support a war that lost its utility long ago, as well as its popular support. Ask why he or she has ducked debates on critical questions of war and peace out of political expediency.

The generals insist we’re winning, or at least “turning the corner”; that is what generals do. To quote a very winning General George S. Patton, Jr., “the very idea of losing is hateful to an American.” That includes American generals, who instill a can-do attitude down the chain of command. They make it seem like there is no problem too intractable for the U.S. military to solve. We are, after all, the “indispensable nation.” Or so the theory goes.

But perhaps this hatred of defeat and our inability to escape our hubris is a reason why our leaders don’t have the best track record of admitting when a cause is no longer worth expending lives and resources on.

In Afghanistan, that sense of hubris has been on full display. We have failed utterly to frame our strategy around achievable goals. Given an essentially non-functional and corrupt Afghan national government, an overstretched and often unreliable Afghan army, a penchant for tribal fighting, and too many Americans who have seen too much war and not enough victory, we are perfectly justified in asking what America’s military investment has all been for.

One wag points out that “the only reason why Afghanistan cannot be called a ‘Forever War’ is the conflict is sure to end abruptly 5 billion years from now when the sun explodes and destroys Earth. (However, Pashto grievances run so deep that the Taliban could be fighting in a parallel dimension by then.)”

And what of the Taliban? They are guilty, certainly, of harboring, aiding, and abetting transnational terrorists. Yet the world is full of ungoverned and semi-governed spaces that are home to terrorists; we have not invested a trillion or more dollars and 2,400 American lives in each of those places. So why does Washington insist on doing it in Afghanistan?

The solution starts with defining the problem. Conventionally stated, that problem is that without a big and sustained U.S. armed presence, the country will become a terrorist sanctuary.

Well, it sort of already is. The most recent U.S. Special Inspector General for Afghan Reconstruction report stated that “Afghan government control or influence over districts declined by nearly two percentage points since July to 53.8%.” The military deadlock on the ground has been unending. There is no evidence that keeping a sizable U.S. troop presence in Afghanistan can do much of anything to change the situation in any appreciable way.

The main problem hanging over the heads of our political and military leaders, however, is more fundamental. The issue is that Washington refuses to accept what a lot of Americans are privately concluding: that whatever may befall Afghanistan, it is not worth fighting an endless war over.

The American College of National Security Leaders, a group of retired flag officers, ambassadors, and senior government executives committed to strengthening our national security, supports ending the war in Afghanistan for three main reasons: it has gone on too long, soaked up too many resources, and become a perpetual distraction.

While a lawless Afghanistan would likely become a haven for terrorism, we must also recognize that U.S. national security interests can still be protected without a permanent and expensive military commitment. American leverage in Afghanistan is far more extensive than its military assistance.

The U.S. can maintain its (modest) achievements in Afghanistan, support the Afghan government’s counterterrorism efforts, and help promote stability in the country without a big military commitment and an annual infusion of $45 billion a year. We can do it through our extensive national power capabilities, from “soft power” promises of financial assistance in the event of an intra-Afghan peace deal, to continuous intelligence coordination on shared national security threats, to preserving the “hard power” ability to destroy intractable targets with special operations forces, drones, airstrikes, and so on.

In short, the U.S. needs to right-size what it’s willing to commit to a place that inevitably will be riven by militias, ethnic conflicts, and terrorism for the foreseeable future.

Further, Washington should transfer the Afghan problem from the Pentagon to the State Department, with the military in a supporting role. U.S. officials must provide Ambassador Zalmay Khalizad and his team with the space and time to try and craft an agreement with the Taliban that’s “good enough”—an outcome that may prove unattainable anyway.

It’s long past time to look at Afghanistan with clear eyes, free of the hubris that so frequently misdirects our foreign entanglements. If we don’t, the precious few among our next generation who enlist in the military may well end up doing the same as have the past four: hold some fuzzy line in perpetuity, regardless of the cost.