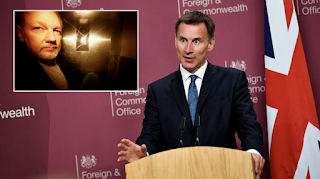 The UK Foreign Office has come under fire after posting a video online that calls for an increase in media freedom in nations around the world, drawing accusations of hypocrisy from those citing the treatment of Julian Assange.

The 13-second video includes the shocking statistic that “Only 10% of the world’s population live in a country with a free media,” with images of journalists and high profile world leaders past and present. It ends with a declaration that “This has to change.”

On the day Australian journalist Assange ‘celebrated’ his 48th birthday inside Belmarsh maximum-security prison, it may not be unreasonable to suggest that this ‘free media’ video was nothing more than the UK government’s way of trolling the WikiLeaks co-founder.

A thought that appears to resonate with many on Twitter. Some people online suggest that the UK is only interested in a ‘free press’ that reports on “regimes that fall for your benefit,” rather than exposing corrupt governments allied to Britain, killing innocent people.

The apparent hypocrisy did not escape the attention of others who highlighted the case of Assange who awaits his now-delayed US extradition request hearing in February in London.