Only the Brits do hypocrisy quite as exquisitely as this 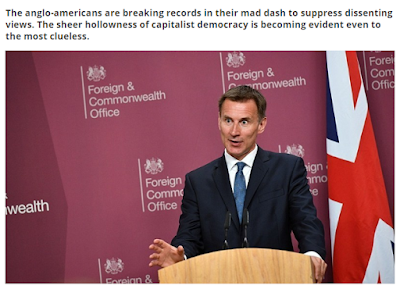 The British Foreign Office has banned Russian outlets RT and Sputnik from attending the upcoming Global Conference on Media Freedom in London, citing their predilection for “disinformation”.

“We have not accredited RT or Sputnik because of their active role in spreading disinformation,” said a Foreign Office spokeswoman.

“It takes a particular brand of hypocrisy to advocate for freedom of press while banning inconvenient voices and slandering alternative media; sadly, the world has learned to expect just that from the UK Foreign Office,” RT said in a statement in response.

“It amounts to direct politically motivated discrimination of the Russian channel,” said the Russian embassyin London. “The refusal of accreditation comes on top of the months-long smear campaign against RT by British political figures, governmental bodies, including media regulator Ofcom, and even fellow journalists.”

“Now a leading Russian international TV channel is denied access to the forum, despite being officially registered and working in the UK, on legal grounds,” the embassy added. “What better illustration of the real situation with media freedom in the UK does one need? Yet the organizers of the Conference, as far as we understand, wish to discuss the situation with media freedom anywhere in the world, but not in this country.”

You won’t see any of this ridiculous, jaw-dropping hypocrisy called out by the BBC, nor by any other mainstream outlet in the uniquely spineless and sycophantic British media. Do you know where you will see this hypocrisy being criticized? RT.

The only reason RT and Sputnik exist with any degree of popularity in the west is because, contrary to what the BBC claims, people are unable to hear any voices that are critical of real power from western mainstream media. If the BBC or any other British outlet were to begin platforming actual anti-war, leftist and anti-establishment voices with any degree of regularity, I can guarantee you with 100 percent certainty that RT and Sputnik would immediately lose their UK audiences.

A lot more at GreanVillePost.