In 2003, Baha Mousa was beaten to death in an illegal interrogation facility operated by the Queen’s Lancashire Regiment. He was found to have 93 sites of injury on his body, including fractured ribs and a broken nose. No one has yet been held to account for his death. 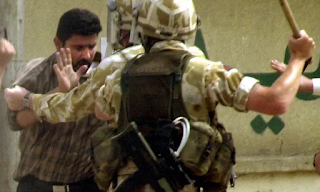 At the public inquiry, Sir William Gage said his death “was avoidable and preventable and there can be no excuses. There is no place in our armed forces for the mistreatment of detainees. And there is no place for a perverted sense of loyalty that turns a blind eye to wrongdoing or erects a wall of silence to cover it up.” He added that it was “a very great stain on the reputation of the British army”.

This stain, however, could be wiped away by the new secretary of defence, Penny Mordaunt. She is proposing granting immunity from prosecution to all those members of the armed forces who “turned a blind eye to wrongdoing and erected a wall of silence to cover up the crime”, so long as a decade has elapsed. In the light of the Mousa case alone, this proposition seems wholly indefensible as no one has yet been held accountable for his death.

However, there is another part to the proposed immunity that has been carefully shielded from public view. The vast majority of allegations against the UK submitted to the international criminal court (ICC) concern interrogation. The techniques used by the British army are a matter of public record. In Iraq in 2003, interrogators first used the five banned techniques. These techniques, which had been declared inhuman and degrading by the courts in 1978, were hooding, stress positions, sleep and food deprivation and white noise.

After this was challenged, a policy of “harshing” was introduced and in 2011 publicly endorsed in the House of Commons by the then secretary of state for defence, Liam Fox. This was little better, often inflicting violence and sexual and religious denigration on the prisoner. Despite being repeatedly advised by military lawyers that the techniques were illegal, the government persisted. No one has ever been held to account for this “institutional error” and now these same people will potentially benefit from this amnesty. In other words, if you breach the Geneva conventions and stall for long enough, then the Geneva conventions no longer apply.

Who will be next in line to receive such state largess? The metropolitan police?
Posted by Gert at 11:11