Chomsky on Lula, Corruption and Neoliberalism

PRISONS ARE REMINISCENT of Tolstoy’s famous observation about unhappy families: Each “is unhappy in its own way,” though there are some common features — for prisons, the grim and stifling recognition that someone else has total authority over your life.

My wife Valeria and I have just visited a prison to see arguably the most prominent political prisoner of today, a person of unusual significance in contemporary global politics.

By the standards of U.S. prisons I’ve seen, the Federal Prison in Curitiba, Brazil, is not formidable or oppressive — though that is a rather low bar. It is nothing like the few I’ve visited abroad — not remotely like Israel’s Khiyam torture chamber in southern Lebanon, later bombed to dust to efface the crime, and a very long way from the unspeakable horrors of Pinochet’s Villa Grimaldi, where the few who survived the exquisitely designed series of tortures were tossed into a tower to rot — one of the means to ensure that the first neoliberal experiment, under the supervision of leading Chicago economists, could proceed without disruptive voices.

Nonetheless, it is a prison.

The prisoner we visited, Luiz Inácio Lula da Silva – “Lula,” as he is universally known — has been sentenced to virtual life imprisonment, in solitary confinement, with no access to press or journals and with limited visits one day a week. 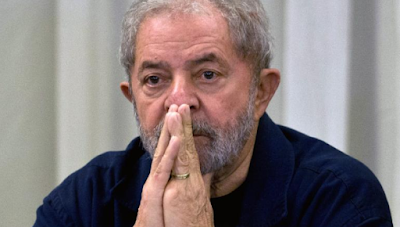 The day after our visit, one judge, citing press freedoms, granted the request of the nation’s largest newspaper, Folha of São Paulo, to interview Lula, but another judge quickly intervened and reversed that decision, notwithstanding the fact that the country’s most violent criminals — its militia leaders and drug traffickers — are routinely interviewed in prison.

To Brazil’s power structure, imprisoning Lula is not enough: They want to ensure that the population, as it prepares to vote, cannot hear from him at all, and are apparently willing to use any means to accomplish that goal.

The judge who reversed the permission wasn’t breaking any new ground. One predecessor was the prosecutor at the 1926 sentencing of Antonio Gramsci by Mussolini’s Fascist government, who declared, “We must stop his brain from working for 20 years.”

“History doesn’t repeat itself but it often rhymes,” as Mark Twain observed.

We were encouraged, but not surprised, to find that despite the onerous conditions and shocking miscarriage of justice, Lula remains his energetic self, optimistic about the future and full of ideas about how to turn Brazil from its current disastrous course.

There are always pretexts for imprisonment — maybe valid, maybe not — but often it makes sense to seek what may be the actual reasons. That is so in this case. The primary charge against Lula, based on plea bargains by businessmen sentenced for corruption, is that he was offered an apartment in which he never lived. Hardly overwhelming.

The alleged crime is almost undetectable by Brazilian standards — and there is more to say about that concept, to which I’ll return. That aside, the sentence is so totally disproportionate to the alleged crime that it is quite appropriate to seek reasons. Candidates are not hard to unearth. Brazil is facing an election that is of critical importance for its future. Lula is by far the most popular candidate and would easily win a fair election, not the outcome preferred by the plutocracy.

Although his policies while in office were designed to accommodate the concerns of domestic and international finance, he is despised by elites, in part no doubt because of his policies of social inclusion and benefits for the dispossessed, though other factors seem to intervene: primarily simple class hatred. How can a poor worker with no higher education who doesn’t even speak proper Portuguese be allowed to lead our country?

In office, Lula was tolerated by Western power, but with reservations. There was little enthusiasm for his success, with his Foreign Minister Celso Amorim, in propelling Brazil to the center of the world stage, beginning to fulfill the predictions of a century ago that Brazil would become “the colossus of the South.” Some of their initiatives were sharply condemned, notably their steps toward resolving the conflict over Iran’s nuclear programs in coordination with Turkey in 2010, undercutting U.S. insistence on running the show. More generally, Brazil’s leading role in promoting forces independent of Western power, in Latin America and beyond, was hardly welcome to those accustomed to dominating the world.

With Lula barred from running, there is a good chance that the right-wing favorite, Jair Bolsonaro, can gain the presidency and seriously escalate the harshly regressive policies of President Michel Temer, who replaced Dilma Rousseff after she was impeached in ludicrous proceedings in an earlier stage of the “soft coup” now underway in Latin America’s most important country.

BOLSONARO PRESENTS HIMSELF as a harsh and brutal authoritarian and an admirer of the military dictatorship, who will restore “order.” Part of his appeal is his pose as an outsider who will dismantle the corrupt political establishment, which many Brazilians despise for good reasons, the local analogue to the bitter reaction in much of the world to the effects of the neoliberal assault of the past generation. Bolsonaro affirms that he knows nothing about economics, leaving that domain to economist Paulo Guedes, an ultraliberal Chicago product.

Guedes is clear and explicit about his solution to Brazil’s problems: “privatize everything,” the whole national infrastructure (Veja, August 22), in order to pay off the debt to the predators who are robbing the country blind. Literally everything, ensuring that the country will decline to insignificance as a plaything of the very rich and the dominant financial institutions. Guedes worked for a time in Chile under the Pinochet dictatorship, so it may be useful to recall the results of the first experiment in Chicago neoliberalism.

The experiment, initiated after 1973 military coup had prepared the ground by terror and torture, was conducted under near optimal conditions. There could be no dissent — the array of Villa Grimaldis and the like took care of that. It was supervised by the superstars of Chicago economics. It had enormous support from the U.S., the corporate world, and the international financial institutions. The economic planners were also wise enough not to interfere with the highly efficient nationalized copper mining company Codelco, the world’s largest, which provided a solid base for the economy.

For a few years, the experiment was highly praised, and then silence reigned. Despite the almost-perfect conditions, by 1982, the “Chicago boys” had succeeded in crashing the economy. The state had to take over more of the economy than under the Allende years. Wags called it “the Chicago road to socialism.” The economy was largely handed back to the traditional managers and struggled back, though not without lingering residues of the disaster in educational and social welfare systems and elsewhere.

Returning to the Bolsonaro-Guedes prescriptions for undermining Brazil, it is important to bear in mind the overwhelming power of finance in the Brazilian political economy. Brazilian economist Ladislau Dowbor reports that as the Brazilian economy sank into recession in 2014, major banks increased profits by 25 to 30 percent, “a dynamic in which the more banks profit, the more the economy is stalled” since the “financial intermediaries do not finance production, but drain it” (“The Era of Unproductive Capital”).