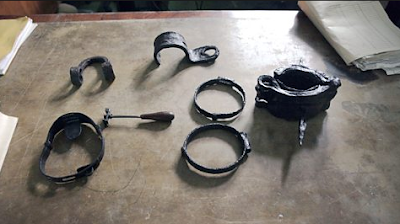 David Olusoga’s two-part documentary Britain’s Forgotten Slave Owners (BBC2) concluded last night by following the money. The money in question was that paid to the slave owners to compensate them for the loss of their human property when slavery was finally officially abolished in 1834. A 10-man committee divvied up nearly £17bn in today’s money among 46,000 claimants stretching across the entire British empire, from £800 or so to a country vicar for his single servant to £80m for John Gladstone’s (father of prime minister William) loss of thousands of unpaid workers on his plantations in Guyana. Not a penny, of course, was paid to the slaves themselves.

The compensation money was drawn largely from consumption taxes, as income tax didn’t exist at the time, which effectively meant the poor paid for it. The disproportionate extra whack they paid for basic goods set those who had already grown fat on the profits of slave labour nicely ever after. They were able to diversify, investing in industry, insurance and institutions whose income streams would balance each others’ fluctuations out and keep flowing nicely down the generations. This useful injection of taxpayer cash enabled its recipients to avoid any hardship once their indefensibly exploitative bubble burst and freed them to concentrate on other things, like building country piles, grooming their sons for government and ensuring that no more than seven families actually matter in Britain at any one time. It’s a good thing history never repeats itself.

Olusoga was able to provide us with a detailed and vivid picture of the spread of slavery profits through the British economy largely thanks to research done by a team of historians at University College London. They have been combing through the 46,000 entries in the Slavery Compensation Commissions accounts books and following the paper trails thereafter. The collated results are free to all at ucl.ac.uk/lbs.

More pernicious still, and as instrumental in shaping our cultural and imaginative landscapes as the money was in our physical and institutional landscapes, were the ideas unleashed and promulgated during the propaganda war between the abolitionists and their opponents. Black people, the latter argued desperately but influentially, were childlike savages who needed the firm, white, paternal hand of discipline to save them from themselves and their innate inferiority. Slavery was abolished (officially – the end of it in practice would take years) but the underlying ideas, theories and attitudes endure. Programmes like this, and thoughtful, thorough, unswerving guides like Olusoga bring them into the light. Because it would be a good thing if history stopped repeating itself.