Is the US seeking regime change in Iran? 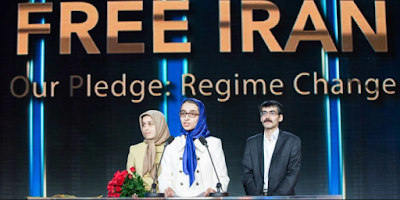 WASHINGTON — White House national security adviser John Bolton claimed Monday that the Trump administration is not seeking regime change in Iran even as it moves to reimpose sanctions on the Islamic Republic that had been lifted by the Obama administration as part of a 2015 nuclear agreement.

“Our policy is not regime change,” he said during an interview on Fox News. “We want to put unprecedented pressure on the government of Iran to change its behavior. And so far they’ve shown no indication they’re prepared to do that.”

But Bolton remains the strongest advocate of the Mujahedin-e-Khalq (MeK), the extreme Iranian opposition group who was the target of a foiled bombing attack in France, and was once a sworn enemy of the United States:

It was only in 2012 that the US delisted it as a terrorist group. But the arrival of John Bolton, the MeK’s most powerful advocate, as US national security adviser has given the group unprecedented proximity to the White House and a new lease of political life.

“There is a viable opposition to the rule of the ayatollahs, and that opposition is centred in this room today,” Bolton said at an MeK rally in Paris last year. “The behaviour and objectives of the regime are not going to change, and therefore the only solution is to change the regime itself.”

Bolton’s ascent to the White House has reinvigorated the group, analysts say, raising questions about the dangers of having in the earshot of the US president a group that some experts say uses human rights concerns to bury its murky past and portray itself as a democratic and popular alternative to the Islamic Republic.

Bolton and the MeK sure make strange bedfellows:

Believed to have between 5,000 to 13,000 members, the MeK was established in the 1960s to express a mixture of Marxism and Islamism. It launched bombing campaigns against the Shah, continuing after the 1979 Islamic revolution, against the Islamic Republic. In 1981, in a series of attacks, it killed 74 senior officials, including 27 MPs. Later that year, its bombings killed Iran’s president and prime minister.

Now remember Operation Ajax? It's very unlikely that the Iranian people will bow to external pressure to remove the Ayatollah regime. The coup against Mossadegh ultimately led to Khomeiny's Islamic revolution. Will Washington/MeK want to go down that route again? Is our children learning?