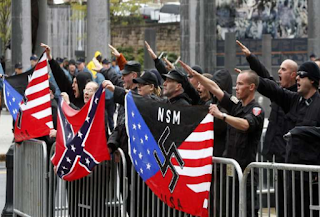 White supremacists and other far-right extremists have killed far more people since Sept. 11, 2001, than any other category of domestic extremist. The Anti-Defamation League’s Center on Extremism has reported that 71 percent of the extremist-related fatalities in the United States between 2008 and 2017 were committed by members of the far right or white-supremacist movements. Islamic extremists were responsible for just 26 percent. Data compiled by the University of Maryland’s Global Terrorism Database shows that the number of terror-related incidents has more than tripled in the United States since 2013, and the number of those killed has quadrupled. In 2017, there were 65 incidents totaling 95 deaths. In a recent analysis of the data by the news site Quartz, roughly 60 percent of those incidents were driven by racist, anti-Muslim, anti-Semitic, antigovernment or other right-wing ideologies. Left-wing ideologies, like radical environmentalism, were responsible for 11 attacks. Muslim extremists committed just seven attacks.

These statistics belie the strident rhetoric around “foreign-born” terrorists that the Trump administration has used to drive its anti-immigration agenda. They also raise questions about the United States’ counterterrorism strategy, which for nearly two decades has been focused almost exclusively on American and foreign-born jihadists, overshadowing right-wing extremism as a legitimate national-security threat. According to a recent report by the nonpartisan Stimson Center, between 2002 and 2017, the United States spent $2.8 trillion — 16 percent of the overall federal budget — on counterterrorism. Terrorist attacks by Muslim extremists killed 100 people in the United States during that time. Between 2008 and 2017, domestic extremists killed 387 in the United States, according to the 2018 Anti-Defamation League report.

“We’re actually seeing all the same phenomena of what was happening with groups like ISIS, same tactics, but no one talks about it because it’s far-right extremism,” says the national-security strategist P. W. Singer, a senior fellow at the New America think tank. During the first year of the Trump administration, Singer and several other analysts met with a group of senior administration officials about building a counterterrorism strategy that encompassed a wider range of threats. “They only wanted to talk about Muslim extremism,” he says. But even before the Trump administration, he says, “we willingly turned the other way on white supremacy because there were real political costs to talking about white supremacy.”

In March 2018, a 20-year-old white evangelical Christian named Mark Anthony Conditt laid a series of homemade I.E.D.s around Austin, Tex., in largely minority communities. The bombs killed two African-Americans and injured at least four others over the course of several weeks, terrorizing the city, yet the local authorities preferred to describe Conditt, who committed suicide, as a “very challenged young man.” Also last spring, another white man, 28-year-old Benjamin Morrow, blew himself up in his apartment in Beaver Dam, Wis., while apparently constructing a bomb. Federal investigators said Morrow’s apartment doubled as a “homemade explosives laboratory.” There was a trove of white-supremacist literature in Morrow’s home, according to the F.B.I. But local cops, citing Morrow’s clean-cut demeanor and standout record as a quality-control manager at a local food-processing plant, made sure to note that just because he had this material didn’t mean he was a white supremacist. “He could have been an individual that was doing research,” the local police chief said.

In this atmosphere of apparent indifference on the part of government officials and law enforcement, a virulent, and violent, far-right movement has grown and metastasized. To combat it, some officials have suggested prosecuting related crimes through expansion of the government’s counterterrorism powers — creating a special “domestic terrorism” statute, for instance, which currently doesn’t exist. But a report released on Oct. 31 by the Brennan Center for Justice at New York University Law School argues that the creation of such a statute could easily be abused to target “protesters and political dissidents instead of terrorists,” and that law enforcement already has ample authority to prosecute domestic terrorism: “Congress must require that counterterrorism resource decisions be based on objective evaluations of the physical harm different groups pose to human life, rather than on political considerations that prioritize the safety of some communities over others.”

The report also calls out the Justice Department for its “blind spot” when it comes to domestic terrorism and hate crimes, which Deputy Attorney General Rod Rosenstein conceded earlier in the week. During a conference on Oct. 29, Rosenstein said that according to the latest F.B.I. crime report, “88 percent of agencies that provide hate-crimes data to the F.B.I. reported zero hate crimes in 2016.” The Justice Department was reviewing the accuracy of the reports, he noted. “Simply because hate crimes are not reported does not mean they are not happening.”

In 2016, the latest full year of data available from the F.B.I., more than 6,100 hate-crime incidents were reported, 4,270 of them crimes against people (as opposed to, say, defacing property). And yet only 27 federal hate-crime defendants were prosecuted that year. “The F.B.I. knows how many bank robberies there were last year,” says Michael German, an author of the Brennan Center report and a former F.B.I. agent, “but it doesn’t know how many white supremacists attacked people, how many they injured or killed.”

More concerning to German, though, is that law enforcement seems uninterested in policing the violent far right. During the first year after Donald Trump’s election, protests and riots erupted across the country, often involving men with criminal histories who, by definition, were on the law-enforcement radar. During the so-called Battle of Berkeley in March 2017, for instance, a far-right agitator named Kyle Chapman became a hero to the alt-right after he reportedly pummeled an anti-fascist counterprotester with a billy club. Chapman was a 41-year-old who had two previous felony convictions. He proceeded to travel around the country, engaging in violence at other protests, now under the online moniker Based Stickman — a cheerful reference to the Berkeley attacks.