Sean Ellis was 19 years old when he was arrested for killing a police officer in Boston. Decades later, he prepares for his fourth trial in Netflix’s Trial 4

Sean Ellis was 19 when he was arrested by Boston police over the killing of an officer in October 1993. Head down and nearly collapsing, barely keeping pace with police, Ellis wore his best suit as officers dragged him into custody – he had just attended the funeral of Celine Kirk and Tracy Brown, his cousins, who had been murdered by Celine’s ex-boyfriend in Ellis’s neighborhood of Dorchester. Ellis had spoken voluntarily to police about his cousins, with whom he was close; days later, he was on trial over the murder of a crooked cop as he slept in his car in a Walgreens parking lot.

Ellis again wore a suit in 2015, as Massachusetts’s highest court upheld a ruling granting Ellis a new trial, his fourth for the same allegation. The years in between, covered generously by the eight-part Netflix series Trial 4, held: two mistrials by hung juries, one guilty verdict based on evidence secured by officers later convicted of corruption, and 21 years, seven months, and 29 days of incarceration for a crime Ellis always maintained he didn’t commit.

The case against Ellis and his friend Terry Patterson over the murder of Detective John Mulligan, 52, was always thin: circumstantial eyewitnesses who didn’t testify in the third trial; the fact that Ellis, by his own admission, bought some diapers from the Walgreens where Mulligan was working detail the night of the murder; Mulligan’s stolen gun found near Ellis’s house by detectives later convicted separately for corruption. Stacking the deck against Ellis, as Trial 4 explains over the first half of its sprawling eight-hour runtime and quarter-of-a-century sweep, was the intense pressure on Boston police to solve Mulligan’s murder, a tradition of the mostly white police force tidying up cases with poor, black suspects, and widespread police malpractice.

The case against Ellis was swift in its condemnation of a black man with circumstantial evidence, but heavily freighted – a deep portal into the fraught law enforcement context specific to Boston, a city notoriously unwelcome to black residents, and an American criminal justice system weighted against defendants like Ellis. “Going into this, we were thinking: did he get a fair trial or not?” director Rémy Burkel told the Guardian. The answer, uncoiled and reiterated over an ambitiously diffuse eight hours, was a resounding no. The series, from The Staircase executive producer Jean-Xavier Lestrade, shows “as fairly as possible what happened in Sean Ellis’s case”, said Burkel – a miscarriage of justice that’s “happening in thousands of other cases”.

It’s clear after the initial episode, which includes interviews with former officers, police commissioners, longtime Boston reporters, and Ellis’s lawyers, that there was potential motive for any number of people not named Sean Ellis to kill Mulligan. Mulligan had one of the highest arrest records on the force, and was known casually as “plain view” – as in, the terminology on records (drugs and weapons “in plain view”) Mulligan used liberally to secure arrests without a warrant. In the wake of the killing on 26 September 1993, Boston police appointed a 65-member commission to find Mulligan’s killer, with leads that never factored in Ellis until he spoke to police about his cousins’ murder.

Trial 4, by contrast, takes little interest in the mystery of who killed Mulligan; the central mystery is justice gone too predictably awry. The first few episodes detail the context and systemic racism which snagged Ellis in the Boston of the early 90s: a city still reeling from the white backlash to attempts to desegregate schools by bussing in the 1970s, and a police force hobbled by basic errors. As outlined in a 1991 Boston Globe investigation called Bungling the Basics, Boston police routinely mishandled crime scenes, collected scant evidence, and relied too heavily on eyewitness testimony.

The middle section details Ellis’s first through third trials, which were riddled with flimsy evidence obtained through questionable methods. (Two of the detectives who investigated Ellis, Kenneth Acerra and Walter Robinson, later pleaded guilty to federal corruption charges, and a third, John Brazil, was given immunity from prosecution in return for his testimony). The final third follows Ellis and his longtime lawyer, Rosemary Scapicchio – dogged and unflappable, with conviction as bright as her Guy Fieri hair – as they secure a retrial and prepare for a fourth trial amid calls to reform the Suffolk county district attorney’s office more in line with the black and brown residents it frequently prosecutes.

As Ellis and Scappicchio prepare for a fourth trial by seeking evidence – withheld by the DA’s office – on potential eyewitness payments by the Boston police, Trial 4 covers the election of Rachael Rollins, a black woman who campaigned on criminal justice reform, as Suffolk county DA. “District attorneys are elected officials,” said Burkel. “If their office doesn’t get a certain amount of convictions, then you’re not re-elected. That in itself is a problem.” The footage of the campaign trail, which pitted incumbent DA Daniel Conley’s protege, backed by the police union, against several reform candidates, doubled as a public service announcement, said Burkel. “If your local DA is up for election, really choose your candidate and vote,” he said. “Get out there and vote, because you do have a voice.”

Like fellow Netflix docuseries How to Fix a Drug Scandal and The Innocence Files, Trial 4 plunges deep into the frustrating, arcane justice system in the US, with a running length that reflects the tortuous protraction of attempts to overturn a wrongful conviction. How to Fix a Drug Scandal, which also focuses on Massachusetts, details how pressure to prosecute drug cases led to misconduct in the underfunded, over-burdened state drug labs, exposing a system generally more keen to save face than fairly re-process the many lives derailed by overzealous and potentially faulty narcotics convictions. The Innocence Files delineates cases of wrongful convictions righted by the Innocence Project by common pitfalls of the American justice system that frequently land innocent people behind bars: flimsy forensics, prosecutorial misconduct, and over-reliance on eyewitness testimony – all of which were used to convict Ellis in 1995. 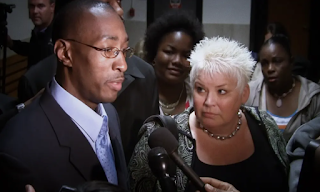 The common refrain, when watching each series in isolation, is that the American justice system is “broken” and in need of repair; Burkel himself said Ellis’s story “shows that the system is broken and it needs fixing”. But taken together, as crime series which refigure the dysfunction of American justice as the central mystery, the US criminal justice seems less broken than inequitable and interminable by design: streamlined convictions of black and brown citizens, incentivized competition and convictions over fairness, and odds stacked against defendants.

Spoiler alert, although it is public information: in December 2018, just two weeks before Rollins was set to take office, acting district attorney John Pappas dropped all charges against Ellis in a last-minute press conference, citing weak evidence. The long exhale for Ellis was welcome but bittersweet; though the weight of prosecution was lifted, Pappas still deemed Ellis “culpable” in Mulligan’s murder. Ellis “wasn’t able to go to a courtroom to prove his innocence and exonerate himself”, said Burkel. Instead, the series “is kind of his fourth trial”.

The parting message, said Burkel, is that “people should be accountable – why aren’t district attorneys more accountable, and why aren’t police more accountable?” Public appetite for change on this is “evolving”, he said, pointing both to the surge in Black Lives Matter activism this summer and the platform that got Rollins elected as Suffolk county district attorney. One might assume accountability as the bedrock of any murder trial, or a criminal justice system; for Ellis, throughout Trial 4, it’s nothing but hard-won.