Stick a fork in it

The first clue President Trump's efforts to overturn the election were not serious was when he appointed stumblebum Rudy Giuliani to head up the effort. Everything that boob involves himself in is quickly reduced to a farcical shambles. 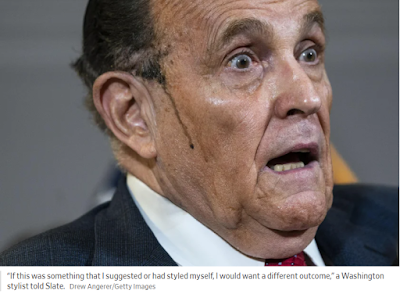 Rudy drools on himself in the courtroom and makes Biden look like the picture of youthful mental clarity, and judges all over the US are throwing out lawsuits left and right, but Team Trump continues to bang the drum on rightwing cable and talk radio. Is this a money grab of some kind, keeping the campaign going? I have my own suspicions...

They can yammer on all day about voting machines and mathematical algorithms, but until they bring the proof in a court of law, its all BS. It's time to pack up the circus tent, send Rudy off to rehab, and have the president deliver a gracious concession speech.

To my fellow Donald Trump voters, I urge you to turn it off, tune it out and drop the bullshitters from your life. Donald Trump did great things and showed the GOP how to win, but its time for him to go. And not return.

Disagree? Bring Evidence. Not Hannity blather, not talk radio talking points or news conference video. Evidence that can be presented to a judge in a court of law.