This time next year Rodders, we'll be billionaires!

In the decades to come, if you want to be a gold titan, you’ll have to get your feet off the ground. The real titans will be far from Earth. 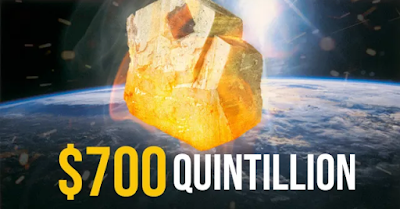 Whether it was the Big Bang, Midas or God himself, we don’t really need to unlock the mystery of the origins of gold when we’ve already identified an asteroid worth $700 quintillion in precious heavy metals.

If anything launches this metals mining space race, it will be this asteroid–Psyche 16, taking up residence between Mars and Jupiter and carrying around enough heavy metals to net every single person on the planet close to a trillion dollars [provided we've gone fully Communist, of course - Ed.].

The massive quantities of gold, iron and nickel contained in this asteroid are mind-blowing. The discovery has been made. Now, it’s a question of proving it up.

“This may be the Holy Grail of space exploration for gold, but it won’t be the first stop on this adventure,” Moore says.

Of course, says veteran miner Scott Moore, CEO of EuroSun Mining “The ‘Titans of Gold’ now control hundreds of the best-producing properties around the world, but the 4-5 million ounces of gold they bring to the market every year pales in comparison to the conquests available in space.”

In the decades to come, if you want to be a gold titan, you’ll have to get your feet off the ground. The real titans will be far from Earth.

Moore should know: He heads up a junior mining company that is seeking a seat at the titan table with the biggest in-development gold mine in Europe.

Can we actually extract this space gold? That is the quintillion-dollar question, certainly. (Click'n read on).