CIA: Mission Accomplished; Americans Believe What We Tell Them

At his first White House performance with other senior officials of the incoming Reagan administration, freshly appointed (but veteran covert action operative) intelligence chief William Casey told President Reagan and the others assembled:“We’ll know our disinformation program is complete when everything the American public believes is false.”

Hard to believe? Read below what an eye-witness has attested to:

“I am the source for this quote, which was indeed said by CIA Director William Casey at an early February 1981 meeting of the newly elected President Reagan with his new cabinet secretaries to report to him on what they had learned about their agencies in the first couple of weeks of the administration. The meeting was in the Roosevelt Room in the West Wing of the White House, not far from the Cabinet Room. I was present at the meeting as Assistant to the Chief Domestic Policy Adviser to the President.

As he did to all the other secretaries of their departments and agencies, Reagan asked Casey what he saw as his goal as director for the CIA, to which he replied with this quote, which I recorded in my notes of the meeting as he said it. Shortly thereafter I told Senior White House correspondent Sarah McClendon, who was a close friend and colleague, who in turn made it public.” Barbara Honegger

There are hundreds of examples that could be adduced to show that the major corporate-owned media — whether by intimidation, misguided “patriotism,” or self-censorship — have made Casey’s dream come true. Such is the case, of course, with the bogus Russia-gate story, by which the media have succeeded, inter alia, in further tarring the reputation of WikiLeaks founder Julia Assange. 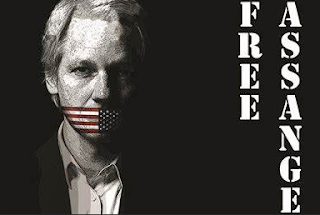 A glaring Assange-related example has come to light — all right, maybe not to light for those of you who depend on the “mainstream media” for “news.” The following story tells itself. It is worth reading in full — and reflecting upon, as we celebrate this July 4 the freedoms the Founders gave us.

In a word, absent a free media, there is no freedom. None.

For once telling the truth has become a crime, while the powerful enjoy impunity, it will be too late to correct the course. We will have surrendered our voice to censorship and our fate to unrestrained tyranny.

It is a warning we would do well to heed — and do something about.
Posted by Gert at 06:48