What do a Yemeni refugee in the queue for food aid, a checkout worker in a British supermarket and a depressed university student have in common? They're all being sifted by some form of artificial intelligence.

Advanced nations and the world's biggest companies have thrown billions of dollars behind AI - a set of computing practices, including machine learning that collate masses of our data, analyse it, and use it to predict what we would do.

Yet cycles of hype and despair are inseparable from the history of AI. Is that clunky robot really about to take my job? How do the non-geeks among us distinguish AI's promise from the hot air and decide where to focus concern? 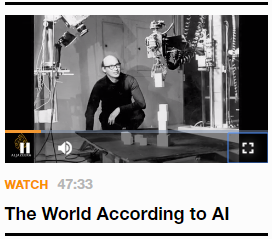 Computer scientist Jaron Lanier ought to know. An inventor of virtual reality, Lanier worked with AI pioneer Marvin Minsky, one of the people who coined the term "artificial intelligence" in the 1950s. Lanier insists AI, then and now, is mostly a marketing term. In our interview, he recalled years of debate with Minsky about whether AI was real or a myth:

"At one point, [Minsky] said to me, 'Look, whatever you think about this, just play along, because it gets us funding, this'll be great.' And it's true, you know ... in those days, the military was the principal source of funding for computer science research. And if you went into the funders and you said, 'We're going to make these machines smarter than people some day and whoever isn't on that ride is going to get left behind and big time. So we have to stay ahead on this, and boy! You got funding like crazy.'"

But at worst, he says, AI can be more insidious: a ploy the powerful use to shirk responsibility for the decisions they make. If "computer says, 'no,'" as the old joke goes, to whom do you complain?

We'd all better find out quickly. Whether or not you agree with Lanier about the term AI, machine learning is getting more sophisticated, and it's in use by everyone from the tech giants of Silicon Valley to cash-strapped local authorities. From credit to jobs to policing to healthcare, we're ceding more and more power to algorithms, or rather - to the people behind them.

More from Comrades at Al Jazeera, with video.