VENEZUELAN opposition politician Juan Guaido and his cronies have been accused of embezzling funds raised at a Colombian concert for humanitarian aid and lavishly spending it on hotels, nightclubs and expensive clothes. 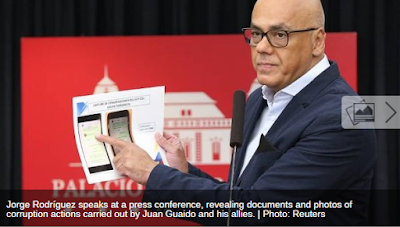 They are also accused of planning to beg Colombian President Ivan Duque to help channel funds through an NGO to pay for assassins from other Latin American countries in their bid to destabilise Venezuela.

Foreign Minister Jorge Rodriguez made public documents including WhatsApp screenshots and photographs which purported to show a “network of corruption” led by Washington-backed Mr Guaido, who seeks to oust the democratically elected President of Venezuela Nicolas Maduro.

Mr Rodriguez alleged Mr Guaido was asked to seek help from the Colombian president in finding an NGO where funds of up to $1 trillion (£798.24 billion) could be held.

The minister reported that Venezuelans with criminal records were sent to Colombia posing as military exiles to collect the cash.

Right-wing Miami-based newspaper the PanAm Post claimed that Mr Guaido had placed Rossana Barrera, the sister-in-law of his right-hand man Sergio Vergara, and Kevin Rojas of the Popuar Will party in charge of distributing the funds to Venezuelans in Colombia.

But it soon became apparent the pair were living beyond their means.

PanAm editor Orlando Avendano claimed he had obtained receipts that “show excesses and several very strange invoices signed on the same day and with identical writing styles, almost all without a stamp, for almost a million dollars worth in hotels, nightclubs, restaurants and a lavish lifestyle.”

Secretary general of the Organisation of American States Luis Almagro has called for an investigation that would clarify the “serious charges,” identify those responsible and hold them accountable.