Our man inside the Ziomess has done sterling work yet again!

Our Man in Zion

Agent Hoffman, our anti-Zionist-man-undercover guy in the Britzio movement continues to deliver more than his modest paychecks warrant.

He's now managed to get himself (and an unsuspecting mark - Damon Lenzner) arrested for and convicted of Thuggery and Physical Intimidation of Sandra Watfa.

They were both fined, sentenced to community and restraining orders. Lenzner was subject to a curfew and an electronic tag. They were also barred from approaching Sandra Watfa, the woman they harassed or Mr Haverty-Stacke, whom Lenzner punched. Reports can be found in Electronic Intifada, the Jewish Chronicle and Jewish News. 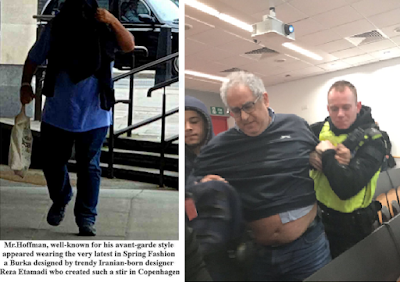 Wherever (Agent) "The Hoff" goes, British Zionism is shown to be the thuggish pro-Israel enforcers that they are and occasionally in the dock for their trouble. Well done, Comrade Hoffman!

And he's great at keep digging when in a hole:

When he was first informed that he was going to be prosecuted Hoffman accused the Crown Prosecution Service and the Police of ‘institutional anti-Semitism’ (in fact he called the CPS ‘institutionally anti-Israel but since all opposition to Israel in Hoffman’s book is ‘anti-Semitism’ then that is what he really meant).