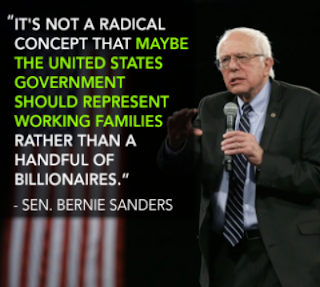 Thanks in part to an ongoing reawakening of left politics amid rising inequality, questioning the tyranny of extreme wealth is fast becoming the stuff of mainstream political debate. And with the re-injection of class politics into the American political arena, there is growing momentum for previously unthinkable policies like a 70 percent top marginal rate and a sharply increased estate tax. (Minnesota representative Ilhan Omar also deserves credit for proposing an even higher top marginal rate of 90 percent).

The singling out of individual billionaires has also gained a foothold in mainstream politics, thanks in no small part, once again, to Bernie Sanders, who has made moral condemnation of the billionaire class, from Jeff Bezos to the Walton Family, his bread and butter. Asked about Starbucks CEO Howard Schultz’s prospective presidential run several weeks ago, for example, he curtly replied:

Why is Howard Schultz on every television in the country? Why are you quoting Howard Schultz? Because he’s a billionaire. There are a lot of people I know personally who work hard for a living and make forty, fifty thousand dollars a year that know a lot more about politics than Mr Schultz. But because we have a corrupt political system, anybody who is a billionaire, who can throw a lot of ads on television, suddenly becomes credible.

This sudden rupture in America’s longstanding political culture of obsequious deference to billionaires is overdue, to put it mildly, and the Democratic presidential primary race — which is going to run the gamut from progressives like Sanders and Elizabeth Warren to billionaire-adjacent candidates and maybe even actual billionaires — will be a testing ground for pro and anti-billionaire arguments alike.

Likely for this very reason, some centrist opinion-makers seem keen to plant their flags somewhere in the middle of the debate (where else?), defending the ultimate existence of billionaires while arguing there could, potentially, be fewer of them, maybe. A recent illustration of this position was the New York Times op-ed by Times contributor Will Wilkinson, of the soft-libertarian Niskanen Center, entitled “Don’t Abolish Billionaires — Abolish Bad Policy Instead.”

Wilkinson rightly recognizes that “enthusiasm for radical leveling” is “blossoming into a mainstream mood.” But he cautions, “I hope that [prospective Democratic nominees will] stick up for the idea that it can be morally kosher to bank a billion and that the existence of virtuous three-comma fortunes is a sign not of failure but of supreme policy success.”

The empirical record is quite clear about the general form of national political economy that produces the happiest, healthiest, wealthiest, freest and longest lives. There’s no pithy name for it, so we’ll have to settle for “liberal-democratic welfare-state capitalism.” There’s a “social democratic” version . . . and there’s a “neoliberal” version. You may prefer one version over the other, but they’re not all that different. And in comparative terms, they’re all insanely great. The typical citizen of these countries is as well-off as human beings have ever been. These places are the historical pinnacle of policy success. But guess what? There are billionaires in all of them . . . So what’s the problem? Preventing billion-dollar hoards guards against the bad consequences of . . . having the best sort of polity that has ever existed?

He then proceeds to proffer an all-too-familiar narrative in defense of billionaires: namely, that some of them are innovators who have simply been rewarded for their contributions to society. There are therefore deserving billionaires and undeserving ones, and the former should be actively celebrated. In this telling, billionaires are a potentially, though not inherently, positive corollary of our economic system rather than a structural deficiency or failure.

A few things should be said about these arguments.

The first is a basic complaint about Wilkinson’s circular logic. System Y being better than System X is not a sufficient defense of System Y, even if its relative superiority can be agreed upon. Most members of the urban proletariat in nineteenth-century Europe were almost certainly materially better off than their equivalents in the Middle Ages, but the superiority of pre-democratic industrial capitalism to feudalism is not an argument for its superlative virtue. By the same token, the presence of billionaires in modern liberal or even social democracies is not in and of itself a defense of them.

And even with his qualifier attached (“in comparative terms”), Wilkinson’s characterization of all Western liberal democracies as “insanely great” is difficult to credit. The United States is the richest society in the history of civilization but also has obscene levels of poverty and inequality. As Meagan Day recently noted, Jeff Bezos makes the equivalent of the median US income every twelve seconds, but some 40 percent of Americans lack even $400 in reserve funds and are thus a single emergency away from disaster.

To state what should be obvious, these two facts are not unrelated. Vast concentrations of wealth in the hands of the few is both how and why there is so much poverty and insecurity among working and middle-class Americans, despite there being so much wealth overall. Thanks to their cumulative labor — in factories, schools, hospitals, care homes, restaurants, and throughout the economy — an immense amount of wealth is produced in a society like the United States, but much of it is expropriated by billionaires in the form of rents and capital income. No one earns a billion dollars, but hierarchical economic structures and a skewed political system ensure some nevertheless acquire it because of the property they own. A billion dollars, let alone the over $100 billion amassed by Jeff Bezos, is not a reward proportionate to someone’s social contribution. It’s institutionalized theft, plain and simple.

Nor is it the case that billionaires are just like regular citizens but happen to be wealthier than others. Wilkinson, to his credit, does at least acknowledge the potentially nefarious influence of the billionaire class on the institutions of democracy, but mostly elides it using the same circular logic:

The progressive idea here is usually that people with vastly more wealth than the common run of citizens wield vastly disproportionate political power and therefore imperil democracy and the equal worth of our basic rights. It’s a worry we’ve got to take seriously, but it’s based more in abstract theorizing than empirical analysis. Inspect any credible international ranking of countries by democratic quality, equal treatment under the law or level of personal freedom. You’ll find the same passel of billionaire-tolerant states again and again.

And contrary to what Wilkinson says, the threat described above is anything but an abstractly theorized one. As a class, billionaires visibly exert a tremendous and insidious influence on political decision-making, bankrolling key figures in both the Democratic and Republican parties and working overtime to mold legislation in their collective favor. Being a thousand, ten thousand, or a hundred thousand times wealthier than the average person invariably translates into a level of power and influence that is incompatible with the basic principles of democratic equality. To put it in the starkest terms possible, you can have a society with billionaires or you can have a genuine democracy, but you can’t have both. (Swedish social democracy may be somewhat more insulated from the threat posed by its billionaires than American liberal democracy, but it remains imperiled and compromised nonetheless.)

Far from being a necessity or even a basically tolerable corollary of prosperous societies, the obscene hoarding of wealth by a tiny few is an expression of deep and abiding injustice. The billionaire class is the modern, capitalist equivalent of the feudal landed gentry: acquiring its fortunes through the exploitative extraction of rents and wielding its immense wealth and power to tighten its illegitimate grip on both politics and the economy.

It’s a moral abomination we’d all be much better off without.