Welfare benefits for the wealthy 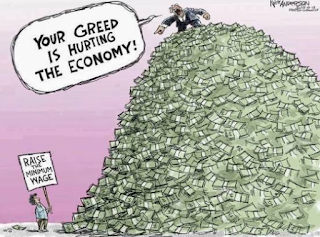 This April 15 is the true start of another mass redistribution of wealth upwards, this one engineered by the Tax Cuts and Jobs Act of 2017. The effects are so large, James S. Henry, a senior advisor to the Tax Justice Network, told me in an interview last month, that the most appropriate analogue is the physical distribution of land rights to railroad barons two hundred years ago.

The act’s widely reported hallmark is to reduce the amount corporations must contribute to our collective pot by cutting the corporate income tax rate from 35 percent to 21 percent. That alone is bad enough.

Less frequently reported are all the other corporate goodies found in the five-hundred-plus pages of the act, which was rushed through the Republican-dominated Congress with no real debate or public hearings. There’s a provision that allows multinational corporations to continue hiding their collective $2.6 trillion in offshore accounts, as long as they pay a small “repatriation tax” divvied up into even smaller increments over eight years. There’s a 100 percent deduction for any corporate investments that fall in value. There’s a new 20 percent deduction for “pass-through businesses”—businesses that pay no corporate income tax—which, contrary to what Trump would have you believe, aren’t just small businesses, but also hedge funds, law firms, and massive corporations. Bechtel, the $25.9 billion corporation that led construction of the Hoover Dam and made a lot of money “reconstructing” Iraq, is a pass-through business. So are some of the companies in the Trump Organization.

Those corporate tax cuts are big wet kisses to the wealthiest class. The swells get more love as individuals, too. The top 1 percent earned an average tax cut that equalled 2.6 percent of their income last year, for example, about $48,320 per household, the Institute on Taxation and Economy Policy found. And now a married couple can leave their kids $22 million before the estate tax kicks in, double the previous amount.

Besides the overriding sense of how unfair it is for rich people to get such handouts, you may not immediately feel the effects of the Tax Cuts and Jobs Act. In fact, some low- and middle-income households may even see a little more money because of it, at first. Average households earning between $40,000 and $64,000, for example, could pay $810 less in taxes, according to the ITEP. The poorest households, on average, may see a savings of 0.9 percent of income—$120— about $2.31 per week. Of course, what that means for whether you owe money to the government or get a refund depends on each individual, and refunds in general are down this year, according to the IRS. But either way, those tiny benefits are set to expire in 2025. Most of the cuts for the top dogs are permanent.

Where you’ll really feel it is in the years to come, when a bridge collapses beneath you during rush hour, or Congress slashes funding to Medicare and Medicaid or cancels food stamp programs, or generally guts spending on everything except the military, because they say they don’t have the money for it. That’s what these tax cuts really do: they give lawmakers a reason for not spending money on the most vulnerable.

Already Trump’s 2020 budget proposes spending cuts to Medicaid, Medicare, Social Security, Centers for Disease Control, and global AIDS prevention programs, among other things. “What we see now have been decades of cutbacks to welfare argued around the premise that we can’t afford these welfare programs because we don’t have the money for them,” John Christensen, director and chair of the Tax Justice Network, told me in an interview. “We’re going to see inequality in the U.S. rise significantly,” he said. “Welfare services, education services, public health services, have all been cut back. That’s the practical impact. These tax cuts serve no useful purpose. There’s no stimulus. But what it does do is feed into cutbacks to government programs for the elderly, sick, the people without jobs.”