Is it April 1st yet?

The New Cold War manifests itself in the US mainly as the hysteria around RussiaGate but there are European symptoms too. 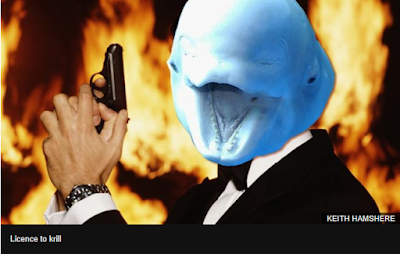 A beluga whale found off Norway's coast wearing a special Russian harness was probably trained by the Russian navy, a Norwegian expert says.

Marine biologist Prof Audun Rikardsen said the harness had a GoPro camera holder and a label sourcing it to St Petersburg. A Norwegian fisherman managed to remove it from the whale.

He said a Russian fellow scientist had told him that it was not the sort of kit that Russian scientists would use.

Russia has a naval base in the region.

The tame beluga repeatedly approached Norwegian boats off Ingoya, an Arctic island about 415km (258 miles) from Murmansk, where Russia's Northern Fleet is based. Belugas are native to Arctic waters.

Googling for 'Russian spy whale', it's clear a sizeable portion of the MSM carries this story, seemingly more or less uncritically. Here's a (non-exhaustive) list: