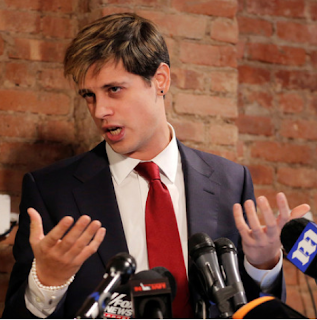 Conservative author Milo Yiannopoulos has made waves by expressing extreme disappointment and anger at Donald Trump and the Republican Party following the president’s reelection chances seemingly all but disappear. “Biden will be President, because American voters sat back and did nothing while third world tier election theft happened right under their noses,” Yiannopoulos wrote on Parler on Friday night in reaction to the Supreme Court shooting down a challenge by Texas and multiple other states seeking to prevent swing states’ electors from affecting the election.

“Don’t blame Trump. Don’t blame the Supreme Court. Blame yourselves, America. You did this. And now you’re getting the government you deserve,” the ‘Dangerous’ author added.

So weird that backing a narcissist didn’t end up benefiting Milo. Who could have predicted that he wouldn’t be thanked and taken care of? It’s just so WEIRD when grifters grift their fellow grifters. SO IRREGULAR. pic.twitter.com/ymdyoEcG3u

Ahhhh... yes!! We are of course, us in the reality based community, all in favour of ruining Milo's "career"!

Much more fun at RT.com