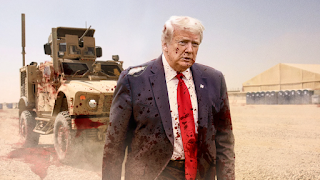 BAGRAM, AFGHANISTAN—Following intelligence reports that Moscow offered to pay Taliban-linked militants to kill coalition forces in Afghanistan, President Donald Trump reportedly slaughtered dozens of U.S. service members Monday in hopes of cashing in on the bounties. “Once I heard Russia was paying out these six-figure sums for dead American soldiers, I knew I couldn’t leave that kind of money lying on the table,” said Trump, remarking that his position as commander in chief gave him full access to U.S. military movements, which meant he had no trouble selecting targets and taking out the troops while they slept. “We weren’t about to walk away from a deal like that. Not on my watch. All we had to do is send in some planes, bomb a few of our bases, and tell the Russians where to send the payment. Believe me, no other president has handled Russia the way I have. No one.” At press time, Republican lawmakers defended Trump’s decision, stating that the president’s methods might be unconventional, but collecting bounties placed on the heads of American troops was good for the economy.