Coup plan B! US tells Guaido he may renounce his Venezuela ‘presidency’ claim – but they’ll still support him 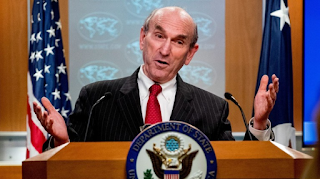 US criminal envoy for Venezuela Elliott Abrams speaks about the new proposal at the State Department, in Washington, March 31, 2020.

The US State Department magnanimously agreed that opposition politician Juan Guaido may not actually be president of Venezuela, but insisted he still has to be part of a transition government if Caracas wants sanctions relief. Secretary of State Mike Pompeo put forth a “democratic transition framework” on Tuesday, under which Venezuelan President Nicolas Maduro would set up a power-sharing interim government with Guaido, that would arrange for elections in six months to a year.

According to Pompeo, the proposal “protects the interests and equities of all Venezuelan people who desperately seek a resolution to their dire political, economic and humanitarian crisis,” and he urged all sides to “carefully and seriously” consider it.

The US and EU would lift their sanctions against Venezuela – including a ban on oil exports and on Maduro and his colleagues personally – if and when the initiative is “fully implemented,” the State Department said.

Within hours, the government in Caracas rejected the US plan, calling it a “a pseudo-interventionist proposal for a supervised government.”

"Venezuela does not accept, nor will it ever accept any tutelage, from any foreign government."

Washington and a score of its allies have stubbornly maintained since January 2019 that Guaido is the true president of Venezuela. Tuesday’s proposal is a tacit admission that his claim is void – but that does not mean the US is giving up on its dreams of regime change.

“We've made clear all along that Nicolas Maduro will never again govern Venezuela,” Pompeo told reporters, adding that the State Department “worked closely” with Guaido when they put together the proposal, and continue to support him.

“I think he's the most popular politician in Venezuela. I think if there were an election held today, he could do incredibly well,” Pompeo said, when asked about Guaido.

In reality, the 36-year-old politician repeatedly failed to muster any decisive support for his claim in Venezuela, despite millions of dollars in US funding, and crushing sanctions targeting Maduro’s government as well as the country in general. Less than a hundred troops answered Guaido’s call for an armed uprising at the end of April 2019.