Do Democrats Prefer Trump in the White House? (Truthdig) 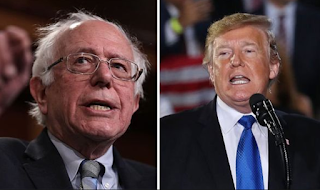 An impeachment proceeding would prolong the “Russiagate” drama, which has provided Democrats with a convenient excuse to avoid confronting why they lost in 2016 to somebody so widely loathed. Most of the citizenry is sick of the multiyear conspiracy drama, an endless media-politics fascination that has sucked up civic oxygen while numerous issues of vastly greater importance have been ignored: economic hyperinequality, bad jobs, inadequate and over-expensive health care, rotting infrastructure, abject plutocracy and rampant gun violence, not to mention our race to environmental self-destruction.

Pelosi and the rest of the establishment Democrats are right to calculate that an impeachment spectacle would not only sputter in the Senate but perhaps even benefit Trump and his party in 2020, much as it did for Bill Clinton in the late 1990s. If nothing else, it would likely help Trump rally his horrid white-nationalist base in several key battleground states. By contrast, voting Trump out of office in 2020 could make him a target for indictment, or perhaps force him to resign in advance of the next president’s inauguration in order to let Mike Pence pardon him first.

But what are the chances of the Democrats actually winning the next election, forcing the president to choose between denying the legitimacy of the vote count (a very real threat) or vacating his office before his term is up? Barring the onset of a recession (another distinct possibility), only popular front-runner Bernie Sanders is likely to prevail against Trump. And, as in the last presidential election cycle, corporate politicos are already working to sabotage the nomination of their most viable candidate in a general election. The following eight mechanisms explain how they might succeed:

Look for the Democratic establishment to do everything it can to prevent its party from defeating Trump in 2020. Surprised? You shouldn’t be. At this point, the party exists to serve its corporate clients. Its leaders fear the specter of socialism while the world’s most powerful nation threatens to slide into fascism. (Never mind that democratic eco-socialism—a political project significantly more radical than what Sanders is proposing—is precisely what America and the world need right now.) Establishment Democrats would rather lose to a white-nationalist right than even the mildly social-democratic left within their own party. It’s why the late political scientist Sheldon Wolin labeled them “the Inauthentic Opposition.”