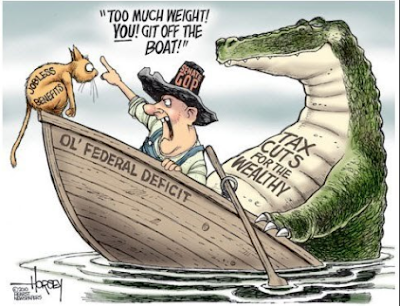 The Trump-GOP tax law was sold as a boon for the middle class. But many months after its passage, there are no signs that working Americans are getting the pay raise they were promised.

The Trump administration claimed the corporate tax cuts would eventually lead to wage increases of up to $9,000 a year for ordinary workers. But so far, workers’ wages remain stagnant.

Tracking by Americans for Tax Fairness shows that only about 400 out of America’s 5.9 million employers have announced any wage increases or one-time bonuses related to the tax cuts. That’s about 0.007 percent.

In fact, real wages have actually declined since last year after accounting for higher gas prices, prescription drug prices, and other rising costs.

If that weren’t bad enough, Trump and the GOP now want to come after the services that working families rely on.

Shortly after signing the tax cut package that will add nearly $2 trillion to the deficit over a decade, Trump proposed a budget that would cut $1.3 trillion for Medicare, Medicaid, and the Affordable Cart Act. The House Republican budget went even further, proposing $2.1 trillion in health care cuts.

Working families are seeing little benefit from the Trump-GOP tax giveaway — and would be devastated by the cuts to services that have been proposed to help pay for it. But a few people are basking in their new tax-cut windfalls:

President Trump: Though he claimed his tax plan would “cost him a fortune,” the new law will undoubtedly make him one.

Trump refuses to release his tax returns, so we can’t know his exact savings. But he’ll benefit greatly from the lower top individual tax rate, the lower corporate tax rate, and especially from the 20 percent deduction for “pass-through” business income (income from S corporations, partnerships, limited liability companies, and sole proprietorships that’s taxed at the individual rather than the corporate level).

The Trump Organization, which is a collection of 500 pass-throughs, could save over $20 million a year from that deduction alone. And the law gifted Trump’s industry — real estate — with myriad new loopholes.

Read who else is benefiting from tax-cut windfalls.