Amidst all that talk of Russia/China meddling... 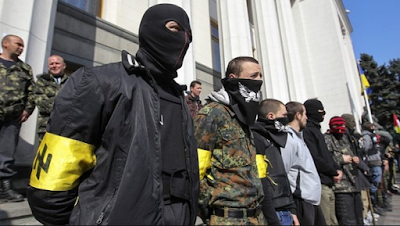 If you wonder how the world could stumble into World War III much as it did into World War I a century ago all you need to do is look at the madness that has enveloped virtually the entire U.S. political/media structure over Ukraine where a false narrative of white hats vs. black hats took hold early and has proved impervious to facts or reason.

The original lie behind Official Washington’s latest “group think” was that Russian President Vladimir Putin instigated the crisis in Ukraine as part of some diabolical scheme to reclaim the territory of the defunct Soviet Union, including Estonia and other Baltic states. Though not a shred of U.S. intelligence supported this scenario, all the “smart people” of Washington just “knew” it to be true.

Yet, the once-acknowledged though soon forgotten reality was that the crisis was provoked last year by the European Union proposing an association agreement with Ukraine while U.S. neocons and other hawkish politicos and pundits envisioned using the Ukraine gambit as a way to undermine Putin inside Russia.

The plan was even announced by U.S. neocons such as National Endowment for Democracy President Carl Gershman who took to the op-ed page of the Washington Post nearly a year ago to call Ukraine “the biggest prize” and an important interim step toward eventually toppling Putin in Russia.

Gershman, whose NED is funded by the U.S. Congress, wrote: “Ukraine’s choice to join Europe will accelerate the demise of the ideology of Russian imperialism that Putin represents. Russians, too, face a choice, and Putin may find himself on the losing end not just in the near abroad but within Russia itself.”

In other words, from the start, Putin was the target of the Ukraine initiative, not the instigator. But even if you choose to ignore Gershman’s clear intent, you would have to concoct a bizarre conspiracy theory to support the conventional wisdom about Putin’s grand plan.

To believe that Putin was indeed the mastermind of the crisis, you would have to think that he somehow arranged to have the EU offer the association agreement last year, then got the International Monetary Fund to attach such draconian “reforms” that Ukrainian President Viktor Yanukovych backed away from the deal.

Then, Putin had to organize mass demonstrations at Kiev’s Maidan square against Yanukovych while readying neo-Nazi militias to act as the muscle to finally overthrow the elected president and replace him with a regime dominated by far-right Ukrainian nationalists and U.S.-favored technocrats. Next, Putin had to get the new government to take provocative actions against ethnic Russians in the east, including threatening to outlaw Russian as an official language.

And throw into this storyline that Putin all the while was acting like he was trying to help Yanukovych defuse the crisis and even acquiesced to Yanukovych agreeing on Feb. 21 to accept an agreement brokered by three European countries calling for early Ukrainian elections that could vote him out of office. Instead, Putin was supposedly ordering neo-Nazi militias to oust Yanukovych in a Feb. 22 putsch, all the better to create the current crisis.

While such a fanciful scenario would make the most extreme conspiracy theorist blush, this narrative was embraced by prominent U.S. politicians, including ex-Secretary of State Hillary Clinton, and “journalists” from the New York Times to CNN. They all agreed that Putin was a madman on a mission of unchecked aggression against his neighbors with the goal of reconstituting the Russian Empire. Clinton even compared him to Adolf Hitler.

This founding false narrative was then embroidered by a consistent pattern of distorted U.S. reporting as the crisis unfolded. Indeed, for the past eight months, we have seen arguably the most one-sided coverage of a major international crisis in memory, although there were other crazed MSM stampedes, such as Iraq’s non-existent WMD in 2002-03, Iran’s supposed nuclear bomb project for most of the past decade, Libya’s “humanitarian crisis” of 2011, and Syria’s sarin gas attack in 2013.

But the hysteria over Ukraine with U.S. officials and editorialists now trying to rally a NATO military response to Russia’s alleged “invasion” of Ukraine raises the prospect of a nuclear confrontation that could end all life on the planet.

This madness reached new heights with a Sept. 1 editorial in the neoconservative Washington Post, which led many of the earlier misguided stampedes and was famously wrong in asserting that Iraq’s concealment of WMD was a “flat fact.” In its new editorial, the Post reprised many of the key elements of the false Ukraine narrative in the Orwellian context of accusing Russia of deceiving its own people.

The “through-the-looking-glass” quality of the Post’s editorial was to tell the “Big Lie” while accusing Putin of telling the “Big Lie.” The editorial began with the original myth about the aggression waged by Putin whose “bitter resentment at the Soviet empire’s collapse metastasized into seething Russian nationalism.

“In prosecuting his widening war in Ukraine, he has also resurrected the tyranny of the Big Lie, using state-controlled media to twist the truth so grotesquely that most Russians are in the dark, or profoundly misinformed, about events in their neighbor to the west.

“In support of those Russian-sponsored militias in eastern Ukraine, now backed by growing ranks of Russian troops and weapons, Moscow has created a fantasy that plays on Russian victimization. By this rendering, the forces backing Ukraine’s government in Kiev are fascists and neo-Nazis, a portrayal that Mr. Putin personally advanced on Friday, when he likened the Ukrainian army’s attempts to regain its own territory to the Nazi siege of Leningrad in World War II, an appeal meant to inflame Russians’ already overheated nationalist emotions.”

The Post continued: “Against the extensive propaganda instruments available to Mr. Putin’s authoritarian regime, the West can promote a fair and factual version of events, but there’s little it can do to make ordinary Russians believe it. Even in a country with relatively unfettered access to the Internet, the monopolistic power of state-controlled media is a potent weapon in the hands of a tyrant.

“Mr. Putin’s Big Lie shows why it is important to support a free press where it still exists and outlets like Radio Free Europe that bring the truth to people who need it.”

Yet the truth is that the U.S. mainstream news media’s distortion of the Ukraine crisis is something that a real totalitarian could only dream about. Virtually absent from major U.S. news outlets across the political spectrum has been any significant effort to tell the other side of the story or to point out the many times when the West’s “fair and factual version of events” has been false or deceptive, starting with the issue of who started this crisis.

In another example, the Post and other mainstream U.S. outlets have ridiculed the idea that neo-Nazis played any significant role in the putsch that ousted Yanukovych on Feb. 22 or in the Kiev regime’s brutal offensive against the ethnic Russians of eastern Ukraine.

However, occasionally, the inconvenient truth has slipped through. For instance, shortly after the February coup, the BBC described how the neo-Nazis spearheaded the violent seizure of government buildings to drive Yanukovych from power and were then rewarded with four ministries in the regime that was cobbled together in the coup’s aftermath.

When ethnic Russians in the south and east resisted the edicts from the new powers in Kiev, some neo-Nazi militias were incorporated into the National Guard and dispatched to the front lines as storm troopers eager to fight and kill people whom some considered “Untermenschen” or sub-human.

Even the New York Times, which has been among the most egregious violators of journalistic ethics in covering the Ukraine crisis, took note of Kiev’s neo-Nazi militias carrying Nazi banners while leading attacks on eastern cities albeit with this embarrassing reality consigned to the last three paragraphs of a long Times story on a different topic. [See Consortiumnews.com’s “NYT Discovers Ukraine’s Neo-Nazis at War.”]

Later, the conservative London Telegraph wrote a much more detailed story about how the Kiev regime had consciously recruited these dedicated storm troopers, who carried the Wolfsangel symbol favored by Hitler’s SS, to lead street fighting in eastern cities that were first softened up by army artillery. [See Consortiumnews.com’s “Ignoring Ukraine’s Neo-Nazi Storm Troopers.”]

You might think that unleashing Nazi storm troopers on a European population for the first time since World War II would be a big story given how much coverage is given to far less significant eruptions of neo-Nazi sentiment in Europe but this ugly reality in Ukraine disappeared quickly into the U.S. media’s memory hole. It didn’t fit the preferred good guy/bad guy narrative, with the Kiev regime the good guys and Putin the bad guy.

Now, the Washington Post has gone a step further dismissing Putin’s reference to the nasty violence inflicted by Kiev’s neo-Nazi battalions as part of Putin’s “Big Lie.” The Post is telling its readers that any reference to these neo-Nazis is just a “fantasy.”

Even more disturbing, the mainstream U.S. news media and Washington’s entire political class continue to ignore the Kiev government’s killing of thousands of ethnic Russians, including children and other non-combatants. The “responsibility to protect” crowd has suddenly lost its voice. Or, all the deaths are somehow blamed on Putin for supposedly having provoked the Ukraine crisis in the first place.

And now there’s the curious case of Russia’s alleged “invasion” of Ukraine, another alarmist claim trumpeted by the Kiev regime and echoed by NATO hardliners and the MSM.

While I’m told that Russia did provide some light weapons to the rebels early in the struggle so they could defend themselves and their territory and a number of Russian nationalists have crossed the border to join the fight the claims of an overt “invasion” with tanks, artillery and truck convoys have been backed up by scant intelligence.

One former U.S. intelligence official who has examined the evidence said the intelligence to support the claims of a significant Russian invasion amounted to “virtually nothing.” Instead, it appears that the ethnic Russian rebels may have evolved into a more effective fighting force than many in the West thought. They are, after all, fighting on their home turf for their futures.

Concerned about the latest rush to judgment about the “invasion,” the Veteran Intelligence Professionals for Sanity, a group of former U.S. intelligence officials and analysts, took the unusual step of sending a memo to German Chancellor Angela Merkel warning her of a possible replay of the false claims that led to the Iraq War.

“You need to know,” the group wrote, “that accusations of a major Russian ‘invasion’ of Ukraine appear not to be supported by reliable intelligence. Rather, the ‘intelligence’ seems to be of the same dubious, politically ‘fixed’ kind used 12 years ago to ‘justify’ the U.S.-led attack on Iraq.”

But these doubts and concerns are not reflected in the Post’s editorial or other MSM accounts of the dangerous Ukraine crisis. Indeed, Americans who rely on these powerful news outlets for their information are as sheltered from reality as anyone living in a totalitarian society.