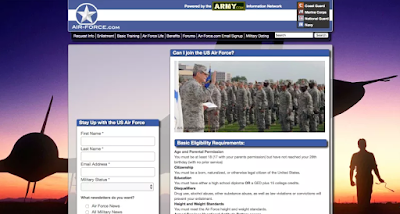 Today, the Federal Trade Commission (FTC) announced it seized nine copycat websites set up to look like U.S. military recruitment pages. The websites, including Army.com and Air-Force.com, encouraged potential recruits to hand over their personal contact information. But that data was then sold to for-profit schools for their own recruitment.

The FTC filed a complaint in federal court today charging that two Alabama-based companies, Sun Key Publishing and Fanmail.com, made roughly $11 million selling data to private schools. The companies would contact the potential recruits and encourage them to enroll at specific for-profit schools under the false impression that the U.S. military endorsed the organizations. If the mark sounded interested, Sun Key would sell that recruit’s information for anywhere between $15 and $40. Tens of thousands of people visited the websites every month.

The defendants were charged with violating the FTC Act as well as the FTC’s Telemarketing Sales Rule and reached a settlement with the government. But they won’t have to give back that $11 million because of their “inability to pay.”