Who was Bartolomé de las Casas?

This year marks the 500-year anniversary of the pricking of one man's conscience. Bartolomé de las Casas, sickened by the exploitation and physical degradation of the indigenous peoples in the Spanish colonies of the Caribbean, gave up his extensive land holdings and slaves and traveled to his homeland in Spain in 1515 to petition the Spanish Crown to stop the abuses that European colonists were inflicting upon the natives of the New World. 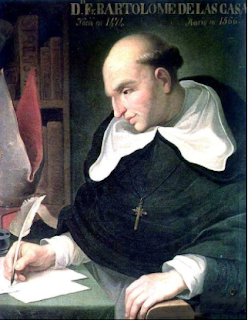 Las Casas (right) rose to become one of the most influential thinkers of his day. He elaborated his views on slavery and the rights of indigenous peoples in numerous tracts including the extremely popular Short Account of the Destruction of the Indies, which was published during his lifetime (c. 1484–1566). Through his actions and writings, Las Casas became an important figure in the development of ideas of what we would now call human rights.

In sixteenth-century Spain, slavery was a widely accepted practice, although increasingly questioned. Spanish law of the time considered all captives of war as potential slaves, yet there were some provisos.

Theologians and philosophers in the School of Salamanca, including the incredibly influential Luis de Vitoria, father of modern international law, restricted this only to include captives of war who were not Catholic. This category included Lutherans, Muslim Turks, Orthodox Slavs, non-Catholic Africans, and native peoples of the New World. In addition, there existed the legal idea, modeled on Muslim laws regarding captured peoples, which allowed non-Catholics to convert instead of becoming slaves.

Despite these legal caveats, Spanish conquerors enslaved large groups of the newly encountered indigenous peoples in the Americas, working many of them to death.

Las Casas arrived in Hispaniola (now Haiti and the Dominican Republic) in 1502, and soon became a land and slave owner, joining military expeditions against the native peoples and becoming a priest in 1510. However, after Las Casas' participation in the violent and destructive Spanish invasion of Cuba in 1513, he began to view European interference in native affairs as illegal and amoral.

Though his petitions began in May of 1515, they would continue until his death in 1566 as he cajoled, shamed, and begged the Spanish crown to end its practices of violent invasion and enslavement. The Spanish government in return treated Las Casas' pleas with ambivalence, in part because indigenous enslavement was so profitable.

The government was not the only ambivalent actor. Las Casas himself changed his rhetoric over time as he and his argument matured. For instance, he originally advocated the use of African slaves instead of indigenous Americans because Spaniards considered them to be hardier than natives.

In fact, African slaves often did have higher survival rates in the early years of invasion because of their tolerance to European diseases due to Old World exposure. Indigenous peoples died quickly of such Old World illnesses as malaria and smallpox, having no exposure immunity. Europeans in the 16th century had no understanding of inoculation or immunity and assumed that Africans were just naturally better suited for labor, assigning this trait to their race.

In making this argument, Las Casas may have inadvertently provided the Spanish government endorsement of the new idea of slavery based on race, rather than the medieval concept of slavery as the result of war and conquest. Las Casas later advocated that all slavery be abolished, but the burgeoning European empires paid little attention to this moral idea when so much wealth and power was at stake.

Las Casas also later advocated that indigenous groups be allowed self-governance under the Spanish crown. His argument drew upon theologians and moral philosophers such as Thomas Aquinas and Aristotle. The Spanish bureaucracy again viewed this through an understanding of Muslim law, which granted non-Muslims the use of their own courts and legal justice system (the protected status known as dhimmi). 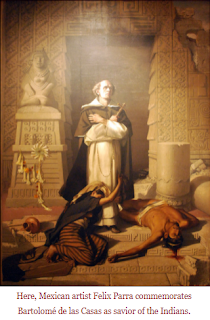 Las Casas’ ideas percolated throughout the Spanish legal system, and indigenous peoples were ultimately allowed to adjudicate in inter-indigenous matters. In cases that involved the Spanish government, they could use the court systems with an advocate known as a "protector" who would represent their interests and offer judgements based on traditional indigenous customs, as long as those customs were not deemed "heretical" or against the Catholic faith. Las Casas himself was appointed the first protector.

Until his death, Bartolomé de las Casas, worked tirelessly to prevent the enslavement of all native people and later regretted wholeheartedly his advocacy of African slavery. Indigenous and black activists and protestors for 500 years have taken up his arguments to push for changes to the systems that have made them second-class citizens.

As we look around the world today at the legal and economic situation of many indigenous communities, one wonders what Las Casas would make of it all and how much further we need to go.