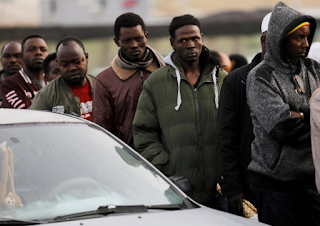 TEL AVIV (Reuters) - Israel is finalizing a deal to deport thousands of African migrants to Uganda under a new scheme after agreements with Rwanda and the U.N.’s refugee agency to find homes for those expelled fell through.

About 4,000 migrants have left Israel for Rwanda and Uganda since 2013 under a voluntary program but Prime Minister Benjamin Netanyahu has come under pressure from his right-wing voter base to expel thousands more.

In January, Israel started handing out notices to male migrants from Eritrea and Sudan giving them three months to take the voluntary deal with a plane ticket and $3,500 or risk being thrown in jail.

The government said from April it would start forced deportations but rights groups challenged the move and Israel’s Supreme Court has issued a temporary injunction to give more time for the petitioners to argue against the plan.

Government representatives told the court on Tuesday that an envoy was in an African country finalizing a deportation deal after an arrangement with Rwanda to take migrants expelled under the new measures fell through.

The representatives did not name the country in court sessions open to the public though Israeli lawmakers have previously said the two countries it was planning to deport migrants to were Rwanda and Uganda.