Stealing gold and various valuables from other helpless countries is something 'Great Britain' has of course ample experience with.

The UK has said it "unequivocally recognises" opposition leader Juan Guaido as Venezuela's president in a crucial ruling over the fate of £800m in gold bullion being held in the Bank of England's vaults.

Banco Central de Venezuela (BCV) took legal action to release the gold held on its behalf, which it wants to sell to help tackle the country's coronavirus crisis, amid US sanctions.

But a British judge has refused to give Venezuela control over the stash of precious metals because it does not recognise Nicolas Maduro as the country's president. 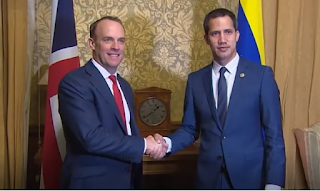 Guaido hasn't won as much as a school presidency, let alone the presidency of a sovereign country like Venezuela.