‘Obsessed with the flag’: Labour recriminations begin in Hartlepool 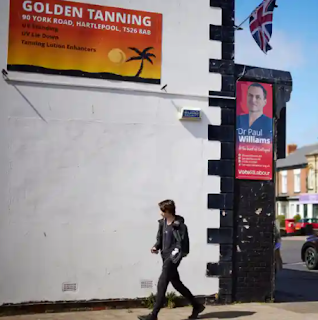 A union jack hangs limply from Labour’s campaign headquarters in Hartlepool. The flag has flown for six weeks over the former vape shop, next to an outlet called We Sell Owt, in the town where Labour fought its most bruising byelection campaign in decades.

As Hartlepool woke up on Friday as the seat of a Conservative MP for the first time in 57 years, Labour figures pointed to the flag as being emblematic of the deep identity crisis behind the party’s shattering loss.

Labour head office was “obsessed with us getting a flag”, said one organiser, bemoaning what they felt was a lack of substance to justify it. “There was no fleshing out what the flag means, or what policies have changed because we’re now patriotic. It was just: bung a flag up.”

A fortnight before polling day, party activists were told to hand out St George’s flag leaflets urging voters to “display this poster with pride in your window”. Labour, a party searching for direction after 11 years out of power, wrapped itself in the flag to try to win back voters who deserted it over Brexit and Jeremy Corbyn. The plan failed.

Labour’s share of the vote plunged to 29% on Thursday, its lowest in almost 100 years, while the Conservatives won a nearly 7,000-strong majority in a north-east England town they recently thought unwinnable. “It’s seismic,” beamed Mike Young, the Conservative deputy leader of Hartlepool borough council, as the ballots piled up for its candidate on Friday morning.

No sympathy from me, Labour. The assassins of Jeremy Corbyn have no clothes on and it shows!