The Biden Jobs and Infrastructure 'FDR plus' Plan: not-so-Obama-Lite now...

The president began selling his proposal on Wednesday, saying it would fix 20,000 miles of roads and 10,000 bridges, while also addressing climate change and racial inequities and raising corporate taxes. 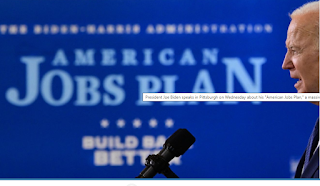 WASHINGTON — President Biden introduced a $2 trillion plan on Wednesday to overhaul and upgrade the nation’s infrastructure, calling it a transformational effort that could create the “most resilient, innovative economy in the world.”

“It is not a plan that tinkers around the edges,” Mr. Biden said in a speech outside Pittsburgh. “It is a once-in-a-generation investment in America.”

White House officials said the proposal’s combination of spending and tax credits would translate into 20,000 miles of rebuilt roads, repairs to the 10 most economically important bridges in the country, the elimination of lead pipes from the nation’s water supplies and a long list of other projects intended to create millions of jobs in the short run and strengthen American competitiveness in the long run.

They said the plan would also accelerate the fight against climate change by hastening the shift to new, cleaner energy sources, and would help promote racial equality in the economy.

The costs would be offset by increased corporate tax revenues raised over 15 years, particularly from multinationals that earn and book profits overseas. The president cast those increases as a means to prod companies into investing and producing more in the United States.

With Republicans already signaling skepticism or outright opposition, Mr. Biden appealed for support from both parties in Congress, saying the program would be “unlike anything we have seen or done since we built the interstate highway system and the space race decades ago” and calling it “the largest American jobs investment since World War II.”

The spending in the plan would take place over eight years, the president said, and the tax increases would more than offset that spending in 15 years, leading to an eventual reduction of the budget deficit. Unlike the economic stimulus passed under President Barack Obama in 2009, when Mr. Biden was vice president, officials will not in every case prioritize so-called shovel-ready projects that could quickly bolster growth.

But even spread over years, the scale of the proposal underscores how fully Mr. Biden has embraced the opportunity to use federal spending to address longstanding social and economic challenges in a way not seen in a half-century.

Officials said that, if approved, the spending in the plan would end decades of stagnation in federal investment in research and infrastructure — and would return government investment in those areas, as a share of the economy, to its highest levels since the 1960s.

The proposal is the first half of what will be a two-step release of the president’s ambitious agenda to overhaul the economy and remake American capitalism, which could carry a total cost of as much as $4 trillion over a decade. Mr. Biden’s administration has named it the “American Jobs Plan,” echoing the $1.9 trillion pandemic relief bill that Mr. Biden signed into law this month, the “American Rescue Plan.”

On Wednesday, Mr. Biden said the next phase, which he will seek to pay for in part through tax increases on wealthy individuals, would come in a matter of weeks and be known as the “American Family Plan.”

While spending on roads, bridges and other physical improvements to the nation’s economic foundations has always had bipartisan appeal, the plan Mr. Biden rolled out on Wednesday drew quick opposition from the right for its size and its reliance on corporate tax increases.

Republicans and business groups criticized those tax proposals, calling them nonstarters for bipartisan negotiations. Mr. Biden acknowledged the criticism, even as he defended asking companies to pay more in taxes. And he said he would continue to work on winning Republican support for his proposal.

He said he had already spoken with Senator Mitch McConnell of Kentucky, the Republican leader, about the bill and planned to invite other Republicans to the White House as Congress turns to translating his proposal into detailed legislation.